The 100 Most Beautiful Faces List is released by TC Candler and The Independent Critics annually since 1990 and is an internet sensation. 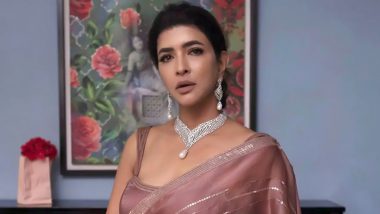 Of late, South Indian film personalities have been going places. Now, popular actor, producer, and host Lakshmi Manchu has been nominated in the 100 Most Beautiful Faces List by TC Candler. The list includes personalities from all around the world, covering over 40 countries having actors, TV personalities, internet sensations, K-pop artists, etc The list is more inclusive and diverse. Lakshmi Manchu Congratulates Samantha Ruth Prabhu as She Completes 12 Years in the Film Industry, Says ‘You Are a Self Made Star’.

Lakshmi Manchu has had a successful career as an actor and producer across industries. Lakshmi is currently dabbling in multiple projects including a Telugu film where she is playing a cop. She is also working with her father Mohan Babu as an actor-producer in 'Agninakshathram'. She is now all set to make her big Malayam debut with superstar Mohanlal.

Apart from being an actor-producer Lakshmi has been a philanthropist and has lent her support to many organisations. Her organisation Teach For Change works for the betterment of the education for children. Lakshmi has also enjoyed a successful stint as a host with shows such as 'Coming to Life with Lakshmi Manchu' and 'Aha Bhojanambu'.

(The above story first appeared on LatestLY on Aug 18, 2022 03:18 PM IST. For more news and updates on politics, world, sports, entertainment and lifestyle, log on to our website latestly.com).