Madhura Raja is all set to release on April 12, which makes it a Vishu treat for all Mammootty fans. 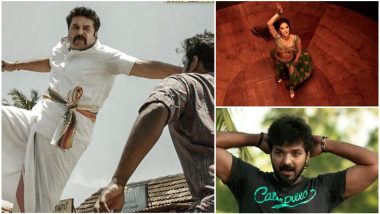 Madhura Raja, for those who don't know, is the sequel to the hit Malayalam movie, Pokkiriraja. Mammootty who plays one of the leads in that film, returns once again as the lovable don with a habit of speaking in broken English. Vyshakh, who is on a blockbuster spree, is also returning as the director. While Prithviraj Sukumaran and Shriya Saran don't look like they are returning, some of the other characters played by Salimkumar, Suraj Venjaaramoodu, Nedumudi Venu and Siddique are returning for the sequel. Madhura Raja vs Athiran: Mammootty’s Film to CLASH With Fahadh Faasil-Sai Pallavi Starrer on This Vishu 2019?

We have the first trailer of Madhura Raja that spells out it is aiming nothing other than being a mass entertainer. Mammootty as Raja is now trying to save a village from Jagapathi Babu's antagonist, while Siddique's Commissioner makes a return. We also see Jai in both his action and romantic avatar, while the trailer also offers a glimpse of Sunny Leone's song in the film. Some of the action sequences have a Pulimurugan feel, but then that was also directed by Vyshakh. Sunny Leone to Shake a Leg With Malayalam Superstar Mammootty in ‘Madhura Raja’ – View Pic.

Madhura Raja is all set to release on April 12, which makes it a Vishu treat for all Mammootty fans. With Mohan's Lucifer doing roaring business in Kerala and overseas, expectations are sky-high from Mammootty and Madhura Raja to give the film a tough competition at making and breaking records at the box office.

(The above story first appeared on LatestLY on Apr 05, 2019 09:03 PM IST. For more news and updates on politics, world, sports, entertainment and lifestyle, log on to our website latestly.com).