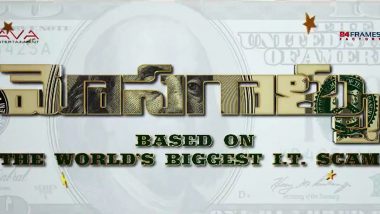 Venkatesh Daggubati has launched the title motion poster of the upcoming flick Mosagallu that stars Vishnu Manchu and Kajal Aggarwal in the lead. The film will also feature Bollywood actor Suniel Shetty in a key role. Through the motion poster, the makers have confirmed that this upcoming film is based on the world’s biggest IT scam. Directed by Jeffrey Gee Chin, this movie is based on true events. Mosagallu: Vishnu Manchu Wishes On-Screen Sister Kajal Aggarwal on Raksha Bandhan 2020 With a New Poster of Their Film.

Vishnu Manchu and Kajal Aggarwal would be seen playing the role of siblings in Mosagullu, whereas Suniel Shetty would be seen playing the role of ACP Kumar. The title motion poster of Mosagullu highlights a time machine and an American dollar banknote and the background music sets a thrilling base to this video. The makers haven’t dropped much details about this film, but it definitely looks an intriguing one.

This film also stars Ruhi Singh, Naveen Chandra and Navdeep in key roles. Sheldon Chau will be handling the cinematography. Mosagallu, produced by under the banners of AVA Entertainment and 24 Frames Factory, was slated to release on June 5. However, the makers had to postpone the release date owing to the coronavirus pandemic. The new release date is yet to be announced.

(The above story first appeared on LatestLY on Sep 18, 2020 11:56 AM IST. For more news and updates on politics, world, sports, entertainment and lifestyle, log on to our website latestly.com).