It was in 2015 when Nayanthara and Vignesh Shivan met each other, on the sets of Naanum Rowdydhaan. 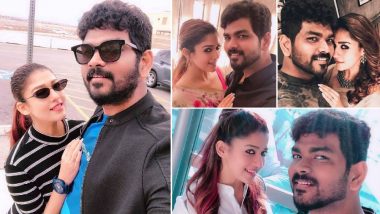 Nayanthara and Vignesh Shivan are one of the popular celebrity couples of Kollywood. The two have never shied to flaunt about their relationship. We often see some lovey-dovey pictures of this couple on social media platform. When Nayanthara’s pictures with her beau’s family hit the internet, the rumours were wedding is on the cards. But when will the engagement ceremony take place is what fans were waiting to know. Now the latest buzz is Nayanthara and her longtime boyfriend Vignesh would soon be getting engaged. Vignesh Shivan Comes Out in Support of Nayanthara, KJR Studios to Ban Sarkar Actor Radha Ravi From Future Projects.

Before getting into a relationship with Vignesh Shivan, the lady superstar of south was dating Prabhudheva. The latter’s wife had threatened the actor that she would go on hunger strike if he marries Nayanthara. After much dispute, in 2012 Nayanthara announced that she and Prabhudheva are not dating anymore. Wedding Bells for Nayanthara and Vignesh Shivan? This Family Pic Spark Rumours of a Marriage.

Vignesh Shivan is an actor, director and a writer working in Tamil cinemas. Naanum Rowdydhaan was his second directorial flick. It was in 2015 when Nayanthara and Vignesh Shivan met each other, on the sets of Naanum Rowdydhaan and the two hit off instantly. Though the two have remained tight-lipped about their engagement and wedding, it is said that the couple will tie the knot next year.

On the work front, Nayanthara was last seen in Airaa, essaying a dual role in the horror film. She is presently shooting for Darbar in which she’d be sharing screen space with Rajinikanth. The film is helmed by A.R. Murugadoss. Stay tuned for further updates.

(The above story first appeared on LatestLY on May 04, 2019 03:47 PM IST. For more news and updates on politics, world, sports, entertainment and lifestyle, log on to our website latestly.com).