GV Prakash Kumar is one of the most popular music composers down south. For the unversed, he is the nephew of Oscar winner AR Rahman. 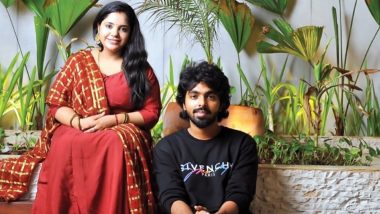 GV Prakash Kumar is one of the most popular music composers down south. For the unversed, he is the nephew of Oscar winner AR Rahman. Prakash’s mother, playback singer AR Reihana, is the elder sister of Rahman. Amid this tension owing to the coronavirus outbreak, here’s a great news for all fans of the composer. GV Prakash Kumar and his wife Saindhavi, who is a singer, have been blessed with a baby girl. They welcomed their baby girl on April 20, reports TOI. Heartiest congratulations to the newly blessed parents on welcoming the little bundle of joy in their lives. Director Anil Ravipudi Names His Baby Boy After Mahesh Babu’s Character From Sarileru Neekevvaru.

GV Prakash Kumar and Saindhavi are childhood sweethearts. The duo tied the knot in June 2013 in Chennai. The couple has not released any picture yet of their newborn. We are sure, fans must be eagerly waiting to catch a glimpse of the little cutie pie. Ever since this news has hit the internet, fans have been pouring in congratulatory messages for the duo. Malayalam Actress Samvritha Akhil Blessed With A Baby Boy, Names Her Second Child Rudra!

(The above story first appeared on LatestLY on Apr 21, 2020 08:26 AM IST. For more news and updates on politics, world, sports, entertainment and lifestyle, log on to our website latestly.com).