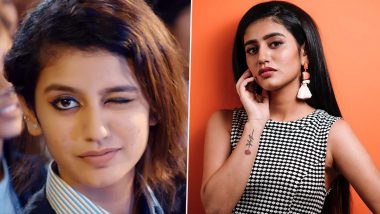 Priya Prakash Varrier shot to fame for her role in the movie Oru Adaar Love. In fact, she became an overnight sensation even before the high-school drama hit the big screens. A video clip from the film’s song “Manikya Malaraya Poovi” had gone viral, in which one of the shows showed Priya winking and that instantly became nationwide talk. Since then she has been known as the Wink Girl. ‘Wink Girl’ Priya Prakash Varrier Says Her Parents Are Still CLUELESS About What Made Her Video Viral.

As per latest reports, Priya Prakash Varrier has deactivated her Instagram account. Looks like the young actress has decided to opt for social media detoxing. Priya has a great number of followers on Instagram. With more than 7 million followers, fans are wondering, what made her to deactivate her account? Amid lockdown, when other celebs prefer to remain active across social media platforms, this move by the Wink Girl has left her fans surprised. After Sridevi Bungalow, Priya Prakash Varrier Signs Second Bollywood Film Titled 'Love Hackers'.

Well, there is no clarity when will Priya Prakash Varrier activate her Instagram account again. But we are sure, fans are going to miss her Insta posts. It was recently that Priya had made her TikTok debut and within no time her first post had gone viral. In fact, she is posting some fun videos on TikTok and entertaining her fans even now. On the work front, Priya Prakash Varrier has two Bollywood projects in her kitty and one Kannada film.

(The above story first appeared on LatestLY on May 18, 2020 04:49 PM IST. For more news and updates on politics, world, sports, entertainment and lifestyle, log on to our website latestly.com).