PSPK27: Power Star Pawan Kalyan Teams Up With Director Krish Jagarlamudi for His Next (View Poster)

Power Star Pawan Kalyan teams up with director Krish Jagarlamudi for his 27th film. #PSPK27 trends on Twitter. Read on. 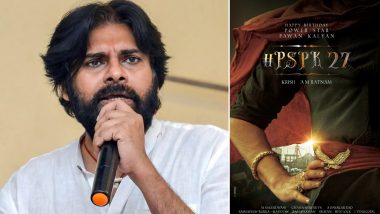 Looks like September 2, 2020, which happens to be Power Star Pawan Kalyan's birthday is turning out to be quite a surprising one for his fans. As it was a while ago when the makers of Pawan's next Vakeel Saab released the motion poster of his film. And now, a new movie announcement has been made which will star none other than Pawan Kalyan. This will be Tollywood star's 27th movie and is said to produced by AM Ratnam and directed by Krish Jagarlamudi. The little glimpse of the untitled is all over social media wherein the poster looks nothing less than a massy entertainer. Vakeel Saab Motion Poster: Power Star Pawan Kalyan's Dapper Look From His Upcoming Courtroom Drama Looks Impressive (Watch Video).

Earlier, reports were doing rounds that Pawan and Krish are said to collaborate for a period film and well finally the cat is out of the bag. Also, along with the film announcement, the team of PSPK27 also issued a statement confirming financial aid to three Pawan Kalyan gans who died of electrocution while erecting banner in Andhra. PSPK27: Power Star Pawan Kalyan’s Period Drama to Feature Sivakarthikeyan in a Pivotal Role?

Here's The Pre-Look Poster Below:

And Here's The Statement About The Tragedy Below:

Meanwhile, a few months back, rumours had it that South actor Sivakarthikeyan is said to play a pivotal role in Pawan Kalyan's 27th film, but nothing has been confirmed yet by the makers. So, how excited are you Pawan's yet to be titled movie? Tell us in the comment section below. Stay tuned!

(The above story first appeared on LatestLY on Sep 02, 2020 01:35 PM IST. For more news and updates on politics, world, sports, entertainment and lifestyle, log on to our website latestly.com).