Rashmika Mandanna Calls Off Her Engagement With Rakshit Shetty; This Is Why the Couple Broke Up

Rashmika Mandanna and Rakshit Shetty are NOT getting married. 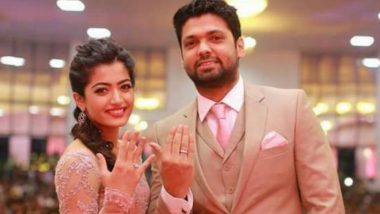 Rashmika Mandanna and Rakshit Shetty are NOT getting married. (Photo Creidt: Instagram)

Now that's something none of us saw coming! Rashmika Mandanna and Rakshit Shetty, who got engaged recently have decided to call off the wedding. The two have broken up and a source confirmed to a daily that even though the two tried hard to work on their differences, their fallout made it more difficult for them to sort everything out. The source said, "Rashmika made the decision after consulting with her parents, family elders and friends. It was a tough decision to make, but she is showing a lot of character in overcoming this personal and emotional setback."Rashmika has also decided to focus on her career as of now.

The source also added, "She has been receiving some exciting offers in Telugu and Kannada, and wants to cement her place in both the industries." Some reports even suggest that Rashmika was not happy with the way things were progressing in her personal life, which were also affecting her professional choices. The actress was last seen in Geetha Govindam and was also trolled on social media for kissing her co-star Vijay Devarakonda onscreen. She will also be seen in Nani and Nagarjuna's Devadas soon. She will also be seen playing a cricketer in her next, Comrade. Rakshit and Rashmika got engaged last year.

The two even celebrated their engagement anniversary this year. Though we do hope that things be cordial between these two. Rashmika or Rakhit haven't spoken about their break up or make an official announcement about it yet. Some reports also suggest that Rakshit has been trying to call her, talk to her and get back together somehow but the actress is not ready to budge and has made her decision about breaking up for good. What are your thoughts on this? Tell us in the comments below and stay tuned with us for more updates.

(The above story first appeared on LatestLY on Sep 10, 2018 04:19 PM IST. For more news and updates on politics, world, sports, entertainment and lifestyle, log on to our website latestly.com).