Rashmika Mandanna To Make Her Bollywood Debut With Mission Majnu; From Kirik Party to Bheeshma, 5 South Movies of Hers You Should Check Out!

Rashmika Mandanna is all set to make her Bollywood debut with Sidharth Malhotra in Mission Majnu. But before you watch that, check out a few of her regional movies which can tell you a lot about her acting skills. 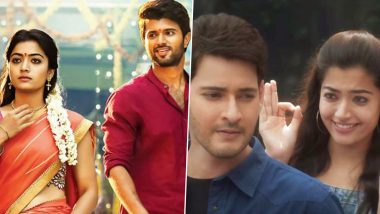 Sidharth Malhotra shared the first poster of his new project Mission Majnu which is apparently about a covert mission nobody knew about. From the poster, it's pretty obvious that the mission has something to do with Pakistan. This movie will also mark the debut of a popular actress in South Indian movies, Rashmika Mandanna. She has been part of some highly famous movies in the last couple of years and has managed to make a niche of loyal fans. They have even started trending her name on Twitter, post the announcement.  Forget Disha Patani, Google Shows Rashmika Mandanna’s Name When You Search for National Crush of India 2020

If you are still wondering where have you seen Rashmika Mandanna, we got you covered. Before you get a glimpse of her in his first Hindi movie, here're some regional films that she has worked on which you can enjoy.

Rashmika plays a girl who becomes a seemingly perfect man's 'The One' and what ensures after that. The character gave her a lot of scopes to explore many nuances from being cross, to angry, to plain vengeful, and then of course being in love. This is a much watch for every hopeless romantic.

This movie reunites Rashmika with her GG co-star Vijay Deverakonda but is a far cry from what you saw in GG. While Deverakonda goes back to being the Rowdy Reddy you know, Rashmika is quieter yet stronger. It's one of her most intense roles ever which will make you appreciate her prowess as an actress.

Rashmika's debut film which was a Kannada one, saw her play an enchanting senior in college. She is such a natural in this character that never would you feel she is a newcomer. The fact the film was a breezy deal also worked for her character.

Although the movie does a disservice to Rashmika Mandanna's character by making her tail Mahesh Babu everywhere and forces herself on him whether he approves or not, Mandanna tries to keep a lot of dignity in the character. Watch it to see how Rashmika saves a dreadful character.

Rashmika's character oscillates between a naive young girl and a mature woman who is aware of her desires. Playing both impressively well, Rashmika is easily one of the strongest characters in the film.

(The above story first appeared on LatestLY on Dec 23, 2020 04:59 PM IST. For more news and updates on politics, world, sports, entertainment and lifestyle, log on to our website latestly.com).