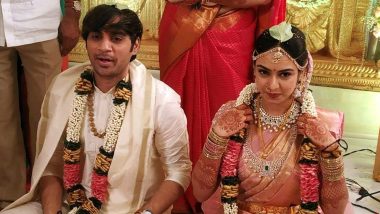 While COVID-19 continues to rage on worldwide, many actors and filmmakers are tying the knot in intimate ceremonies. Saaho director Sujeeth Reddy got married in Hyderabad to his fiancee Pravallika recently at Golconda Resorts. They had gotten engaged on June 10 and close to two months later, tied the knot. It was apparently attended only by close friends and family. Pravallika is a dentist and has dated Sujeeth for a few years now. The parents from both sides met and finalised the dates after the couple decided to take the plunge. Chiranjeevi Excited For Lucifer Remake, Calls The Prithviraj Sukumaran Directorial ‘His Kind of Film’

Pravallika looked pretty in a peachy pink saree and jewellery while Sujeeth looked quite dasing himself. Sujeeth made his debut with Run Raja Run and later went on to make the Prabhas-Shraddha Kapoor starrer Saaho. The later has been embroiled in a controversy over legitimate box office numbers although many believe it's a huge hit. He will be next seen directing Chiranjeevi in the remake of Malayalam movie Lucifer.

A beautiful picture of Pravallika

It seems the South film industry has found a way to adhere to the guidelines and continue with their lives as well. Recently Nithin tied the knot and next up is Ranna Daggubati who will do the same on August 8.

(The above story first appeared on LatestLY on Aug 03, 2020 01:30 PM IST. For more news and updates on politics, world, sports, entertainment and lifestyle, log on to our website latestly.com).