Sarkar: These Stills From The Sets of Vijay's Film With AR Murugadoss Will Leave You Intrigued 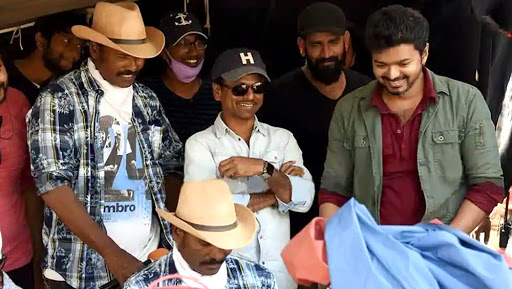 Makers of Sarkar release the stills from the sets. (Photo Credit: Twitter)

Thalapathy Vijay starrer Sarkar is one of the most anticipated films of the year. Vijay began shooting for the film in January 2018; the shooting is progressing at breakneck speed so as to enable it to hit the silver screens on November 7, 2018. After treating us with film's several posters, now, the makers of Vijay starrer have released the stills from the sets, which gives us an insight into his character in the film.

While in one of the stills, filmmaker AR Murugadoss is seen discussing a scene with the actor and comedian Yogi Babu, another picture features a close shot of Vijay, where the actor is seen watching a scene playing out on a screen. In another picture, Vijay looks dapper sporting a suit; The actor is surrounded by a huge crowd in the background of this scene, which is set in a housing board flat complex. Check out the pictures below-

This man looks dashing in all d pics ! Here's one more dharisanam of our #Sarkar ♥️🙏 @sunpictures#SarkarWorkingStills pic.twitter.com/fTSnF4fGM6

The Terrific 3rd Picture from the series of #SarkarWorkingStills via @sunpictures #Sarkar. This image features stunt choreographers Ram-Lakshman Brothers, who will ensure the film has exciting stunt sequences with #Thalapathy #Vijay pic.twitter.com/lavJyObQN1

Reportedly, the music of the film will be launched on October 2. Speaking of music, AR Rahman will compose music for the Vijay starrer. While lyricist Vivek, who delighted all Vijay fans with some impressive and mass lyrics in Mersal, has now officially joined hands with AR Rahman and Vijay for this political thriller (‘Thalapathy 62’ which has now been named as) Sarkar.

Helmed by AR Murugadoss, Sarkar is a political thriller, as the title (Sarkar) suggests. In the film, Vijay is, reportedly, playing a rich businessman’s role in the film. This is the second time that Keerthy Suresh, who has been roped in to play the female lead in the film, has been paired with Vijay after Bhairavaa.

Sarkar also features Pala Karuppaiah, Radha Ravi, Varalaxmi Sarath Kumar in pivotal roles. While Pala, who is a politician in real life, is playing one in the reel life too, Veteran actor Radha Ravi essays the role of an MLA. Sarkar also features Livingston, Yogi Babu, Prem and some other noted actors in supporting roles.

Bankrolled by Kalanithi Maran under the banner Sun Pictures, the film is slated for a grand release this coming Diwali in November. Interestingly, Vijay’s Sarkar will be clashing at the box office with Suriya starrer NGK, directed by Selvaraghavan. Watch this space for further updates.