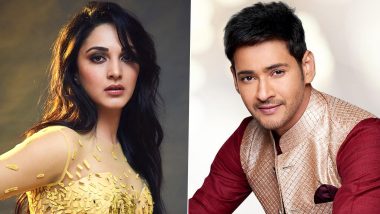 On Sunday (May 31) on the occasion of his father and veteran actor Krishna’s birthday, Tollywood superstar, Mahesh Babu surprised fans by announcing his next project titled Sarkaru Vaari Paata. This one will be directed by Parasuram. While fans were elated to know this big news, many also were curious to know who will be the leading lady in the flick. Now, looks like there are possibilities that the actress who will star opposite Mahesh Babu in his next will be Kiara Advani. Yep, as per a latest report in Mumbai Mirror, Advani will be seen sharing the screen space with the South star in his next. SS Rajamouli Confirms His Next Project With Superstar Mahesh Babu (Deets Inside).

"Kiara and Mahesh were a successful pairing in Bharat Ane Nenu and the makers are looking to recreate the magic. After several rounds of discussions, they felt she fits the bill and with successful films like Kabir Singh and Good Newwz to her credit, they feel Kiara’s presence will give the film a pan-India appeal, particularly in the Hindi belt," the report states.  Was Mahesh Babu Supposed to Play Ram Charan’s Role in SS Rajamouli’s RRR?

For the unversed, Kiara had made her Telugu film debut opposite Mahesh in political drama Bharat Ane Nenu (2018). The report also elaborates that the makers of Sarkaru Vaari Paata are looking out for options to kickstart the shooting once all the safety guidelines are in place. The Tollywood superstar's movie is said to be a family entertainer and will tell the tale of a banking scam. Stay tuned!

(The above story first appeared on LatestLY on Jun 03, 2020 10:33 AM IST. For more news and updates on politics, world, sports, entertainment and lifestyle, log on to our website latestly.com).