RRR filmmaker, SS Rajamouli has finally confirmed his next venture and it's with none other than South superstar Mahesh Babu. Read on. 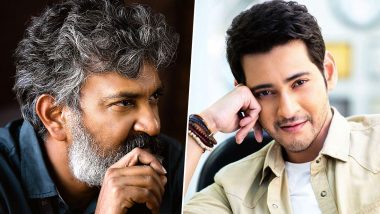 If you happen to be a Mahesh Babu fan, then this piece of news will make you the happiest. As going by the latest report, Mahesh Babu and SS Rajamouli are all set to work jointly soon. After his magnum opus, RRR (Raama Roudra Rushitam), ace director, Rajamouli will be proceeding for his next with the superstar. It was during his talk with TV9 when the filmmaker confirmed his next project with Mahesh Babu which will be directed by none other than KL Narayana under the banner Durga Arts. This is indeed huge and fans of the star can't wait for the movie prep to begin. Was Mahesh Babu Supposed to Play Ram Charan’s Role in SS Rajamouli’s RRR?

It so happened that the news channel host questioned Rajamouli about the rumour of Prabhas or Mahesh Babu in his next. To which he answered and confirmed, “I had already revealed this multiple times. After wrapping up DVV Danayya’s film (RRR), I will direct a film for veteran producer KL Narayana and Mahesh Babu would be playing the protagonist in it.” Well, if things go as per planned and RRR hits the silverscreen on January 8, 2021, then Mahesh Babu and Rajamouli's collab will go on floors next year.  RRR: All You Need to Know About Alia Bhatt-Ram Charan, Jr NTR-Daisy Edgar-Jones' Mega Budget Film!

Currently, SS Rajamouli is busy with RRR which stars Jr NTR, Ram Charan and also marks South debut of Bollywood stars Ajay Devgn and Ali Bhatt. Reportedly, this flick is quite an expensive treat, as it's said to be made on Rs 400 crore budget. This one also stars international actors like Olivia Morris, Alison Doody and Ray Stevenson in key roles. Coming back to Mahesh Babu and Ram Charan's news, we are so happy. Stay tuned!

(The above story first appeared on LatestLY on Apr 18, 2020 01:28 PM IST. For more news and updates on politics, world, sports, entertainment and lifestyle, log on to our website latestly.com).