Varmaa was to be an official remake of the critically acclaimed Telugu hit, Vijay Deverakonda-starrer Arjun Reddy. 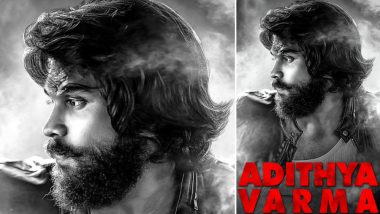 Tamil Cinema saw the strangest of the controversies a few days back with Varmaa. The movie marks the acting debut of Dhruv, the son of National award-winning actor Chiyaan Vikram. Varmaa was to be an official remake of the critically acclaimed Telugu hit, Vijay Deverakonda-starrer Arjun Reddy. The Tamil remake was to be directed by the famed film-maker Bala and had Megha Chowdry as the female lead. The makers have even revealed a trailer of the film, with the release date fixed for June 2019. Varmaa: Shocking! Director Bala Fired From Dhruv Vikram’s Debut, Arjun Reddy Remake to Be Reshot Completely – Read Deets.

And then, it happened. The producer, E4 Entertainment released a statement that they are not happy with Bala's version which is not in alignment of the spirit of Arjun Reddy. So they are scrapping the entire movie and reshooting the film right from the start. Only Dhruv was retained from the original cast.

Now the movie has also got a new name. It will be now called Adithya Varma instead of Varmaa. The makers have announced this change with a new poster, featuring Dhruv.

Interestingly, it was Bala who gave Dhruv's father Chiyaan Vikram his breakout role in Tamil cinema with Sethu (later remade in Bollywood with Salman Khan as Tere Naam). It was also with Bala's film, Pithamagan, that Vikram got his National Award for the Best Actor. So we wonder what happened with Bala's version of the film that made the producers of the Arjun Reddy remake go for such drastic changes including renaming the film!

(The above story first appeared on LatestLY on Feb 19, 2019 07:04 PM IST. For more news and updates on politics, world, sports, entertainment and lifestyle, log on to our website latestly.com).