Swara Bhasker To Step Into Shabana Azmi's Shoes For The Arth Remake? 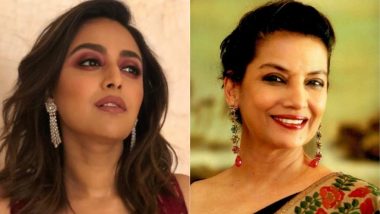 Swara will play the character, which was essayed by Shabana in Arth

That Mahesh Bhatt's 1982 film, Arth is being remade is known to all by now. That Jacqueline Fernandez has been roped to play the role of Kavita Sanyal, which was beautifully played by Smita Patil is also not the latest news. What the recent development is that the makers have finally found an actress, who will step into the shoes of Shabana Azmi, who played the character of Pooja Inder Malhotra in the original film. According to Pinkvilla, it's Swara Bhasker, who has been locked to essay Shabana's character. The modern version of Arth will be directed by South actress-filmmaker, Revathy.

A source revealed to the entertainment portal that, "Swara and Revathy have incredible respect for each other's body of work. Revathy has followed Swara's films and considers her one of the best actresses we have today. So when she was scouting for a performer with a stellar acting prowess to step into Shabana's shoes, she couldn't think of anyone but Swara." Swara definitely has proved her mettle with her outstanding filmography so far. If this is true and the outline of the character remains the same, then it will be really interesting to see Swara play the deserted housewife who goes on a journey to find her own identity, after her husband decides to leave her for another woman, which will be played by Jacqueline. Swara Bhasker Gives a Befitting Reply to a News Portal Trolling Her For Campaigning for Candidates Who Suffered a Loss in Lok Sabha Elections 2019.

The report further states that Swara has verbally agreed to the do the film. She will be signing the dotted line very soon.

Arth is a semi-autobiographical film as Mahesh Bhatt has often said that he wrote this film keeping in mind his extramarital relationship with Parveen Babi. This is the third time that the film is being remade. It was first remade in Tamil as Marupadiyum by Balu Mahendra. It was released in 1993. Then in 2017, Pakistani actor-director Shaan Shahid made a sequel, which was titled Arth 2. Bhatt had acted as a "mentor" during production.

(The above story first appeared on LatestLY on Jun 18, 2019 05:17 AM IST. For more news and updates on politics, world, sports, entertainment and lifestyle, log on to our website latestly.com).