Thakur Anoop Singh, best known for his stint in films like Commando 2 and Yajamana gets candid about his upcoming film 'Khilaadi' his stint on television landscape, and his journey from being fat to fit! 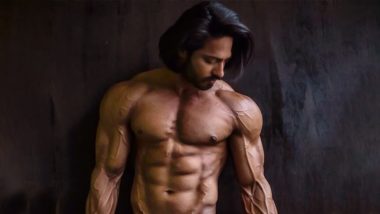 Thakur Anoop Singh, best known for his stint in films like Commando 2 and Yajamana gets candid about his upcoming film 'Khilaadi' his stint as Dhritarashtra of Mahabharat, and his journey from Fat to Fit! We roped in the actor to strike an exclusive conversation where he unveiled a lot of interesting phrases from his journey.

To begin with, When first asked about how the actor bagged the iconic role of Dhritarashtra in the Star Plus show Mahabharat, to which he said "It all began long back in 2009-10 when I was giving auditions, but I was not very familiar with the technicalities of acting! I faced a plethora of rejections before bagging Dhritarashtra. And the hustle did not stop there, I had to wait for a good 3 long years before actually, the show went on floors. I gained a lot of weight for the role as I had to look like a 125-year-old king who lost his sons on the battlefield. I grew my hair and the process was crazy but it was worth it"

Moreover, when asked about how he got back into shape and became one of the most influential bodybuilders of India. To which he said "It all started after Mahabharat. I had gained a lot of weight to justify the role on screen but after that, someone told me about a bodybuilding title 'Mr. India and I just went there to get some pictures clicked so that I can send them across to casting directors. But because of my personality, I ended up winning it"

Last but not least, the Yajamana actor also spoke about his much-awaited Telugu film 'Khilaadi'. "I am blessed to be a part of this project where I got to work hard on my skills as a performer. I used to lock myself in the room after work and my workout. I used to ask the Assistant Director to help me with the pronounciation! After reaching the hotel room, I used to plug-in my earphones and just concentrate on my lines and I used to be the most vulnerable during that time because I also used to dub it in my voice. Getting it dubbed by a dubbing artist is very easy but as an actor, it is just 50% of your performance. So I prefer dubbing my lines in my own voice" said the actor.

(The above story first appeared on LatestLY on Mar 05, 2021 04:45 PM IST. For more news and updates on politics, world, sports, entertainment and lifestyle, log on to our website latestly.com).