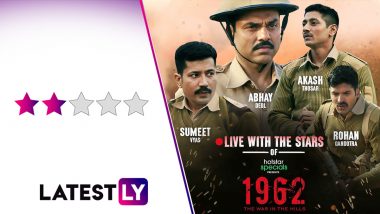 1962 - The War in the Hills Review: Have to say that the timing of Mahesh Manjrekar's debut OTT series, 1962 - The War in the Hills, is quite apt. Even if you cannot say that about anything else much in the show. China's incursion beyond the LAC pops up frequently in the new, so there would be renewed interest in knowing how the two countries - once considered strong allies - began their military skirmishes. The 1962 Sino-India war is a hurting chapter in the history of free India, and it could be a wise idea to revisit the chapter and learn where we went wrong. 1962–The War in the Hills Actor Abhay Deol Claims Bollywood Producers Neither Have Money Nor Talent To Do What OTT Platforms Do.

But if you expect Manjrekar to do that with his series, I would rather advise you to stick to rewatching the classic Dharmendra film Haqeeqat. For 1962 - The War in the Hills lacks the josh that is needed to sustain our interest through its tediously stretched-out 10 episode saga.

Offering a fictionalised narrative of one of the major events that happened during the war, the series focuses on the regiment of Major Suraj Singh (Abhay Deol), whose 125 soldier-unit held their post valiantly against a 3000-odd Chinese army. While it takes the final three episodes to reach this point, the rest of the runtime is about the stories of these brave soldiers from their hometown, which is the same for nearly everyone, and the setbacks they face.

1962 - The War in the Hills takes quite a few pages out of JP Dutta's Border and its ilk, when it comes to narrative techniques. In trying to humanise its heroes, we get their romantic sagas, the family dramas and even caste politics. But that's not the only inspiration source.

Like Titanic, we also have a old lady narrating the story of what happened with Suraj's regiment as a flashback device, while her story itself has other flashbacks. And more astounding than the story she is narrating is the fact of how precisely she knows each and every detail of the events that happened, even though she wasn't involved in most of them.

That old lady happens to be Shagun (Mahie Gill), the wife of Suraj. Their story also involves a track of how she was diagnosed with tumour. Apart from adding needless drama (and stretching the runtime), it is a pointless track since we already knows that she survives her ailment. As to why she waited for so many years to tell her husband's tale of valor to her grandkids, that is a different question altogether.

Suraj Singh is an interesting protagonist when it comes to heroes in our usual army films or series. Considering we still adoringly remember his cousin Sunny Deol's bombastic performance in Border, Abhay takes the opposite route, underplaying his performance and turning him to a more patient, pacifist person. It works to some extent, considering the actor's limited histrionics, and we get a more level-headed protagonist, whose frustrations with the lack of understanding among his higher rankings are felt. However, he is saddled with that tumour subplot, and is often sidelined for the series' other subplots.

The biggest of those is the Sangam-inspired triangle between two soldiers and best friends, Kishan (Akash Thosar, whose Marathi twang sticks out for a character who is Haryanvi) and Karan (Rohan Gandotra), both being in love with their childhood friend Radha (Hemal Ingle). Funnily, Vyjayanthimala's character in Sangam is also named Radha. This track strangely takes up more screen-time than even the war portions, and suffers from dated writing. The supposed bright spark is that Radha's character is shown as headstrong enough to stick with the guy she chooses, while not wanting to be a prize to be competed between the friends. It's another matter that she also mocks her friend for doing 'female chores'. So much for '60s feminism! 1962: The War in the Hills – Hemal Ingle Feared Sairat Star Akash Thosar Wouldn’t Be Friendly.

We also have Rinpa (Rochelle Rao), a local spy for the Indian army, a very grating character who keeps popping up. As for the antagonists, there is Major Lin (Meiyang Chang), who is more of an enemy to his own army - he keeps hitting and shooting his own men, rather than his opponents.

The slightly more interesting track is that of Ram Kumar (Sumeet Vyas), a widower, who is guilted over the death of a fellow soldier who died trying to shield him.

After a okayish start, 1962 - The War in the Hills gets better in the middle portions, where Manjrekar tries to humanises the soldiers through their failures and their trapped circumstances. The discussion of the political apathy and the government and army seniors' lack of touch with ground reality that affect the army units posted in remote locations are also touched upon. This feels refreshing, as rarely do our army movies show the problems that our soldiers face in its obsession with in-your-face patriotism. Though it also makes me wonder if Manjrekar could have gotten away with this, if he was to make a series or a movie on, say, Pulwama or Uri.

That said, the political track - again one of only few interesting subplots - is ignored in the final episodes. Also why the reluctance in naming the PM (Arif Zakaria) who is clearly Pandit Nehru, and his daughter 'Priya' (Geetika Vidya Ohlyan) who is clearly Indira Gandhi, by their real names? The end-credits do have them with the real names!

So after the romantic detours, bland inter-caste affairs and half-baked political angles, I expected the series to pick up in the final episodes, when Suraj Singh's men battles the number odds against the might of a Chinese army. Sadly, the final episodes are the most disappointing. The war portions are marred by frequent slo-mo shots, insertions of songs in every second scene (even though the songs are melodious), crappy CGI and obvious green-screen shots. In between all the battle scenes, the series even inspired a one-on-one brawl sequence that is similar to Khilji and Rattan Singh's fight scene in Padmaavat. By then, I have given up searching for any originality in this!

The final episode, especially, is brought down by this over-use of slo-mo that Manjrekar even adds in scenes that are not even action-oriented!

Mahesh Manjrekar tries to humanise the valour of the Sino-Indian soldiers, but is terribly let down by the writing, editing and his own execution. 1962: The War in the Hills turns out to be a tedious exercise that lets down the heroes it want to immortalise. 1962 The War in the Hills is streaming on Disney+ Hotstar.

(The above story first appeared on LatestLY on Feb 26, 2021 09:01 AM IST. For more news and updates on politics, world, sports, entertainment and lifestyle, log on to our website latestly.com).