Abhay 3 tries to digress from the narrative of the earlier seasons by putting more emphasis on one case rather than being an assortment of many. Guess that was its biggest mistake. Abhay 3 streams on ZEE5.and stars Kunal Kemmu, Asha Negi, Divya Agarwal, Nidhi Singh, Vijay Raaz. 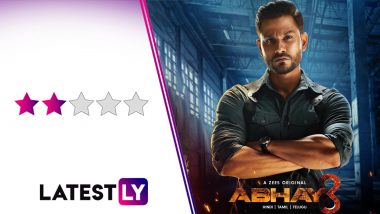 Abhay season 3 review:  The investigative thriller Abhay returns with a third season. This Zee5 original has been quite impactful in all its previous seasons for the unabashed portrayal of gruesome cases and the twisted minds of the criminals. Kunal Kemmu and his STF team form a formidable bunch in solving these crimes. But it seems by the third season, the writers have exhausted their reserve for spine-chilling stories and have resorted to cliches. Abhay 3: Makers Release Kunal Kemmu And Vijay Raaz’s Intense Avatars Ahead Of ZEE5 Series’ Premiere On April 8 (View Poster).

While Abhay (Kunal Kemmu) is busy with the case of missing people, Khushboo (Nidhi Singh) one of his team members, is spending time investigating him sneakily. She strongly feels he is responsible for the disappearance of Sonam Khanna (Asha Negi). She isn't entirely wrong as Abhay has Sonam captive in an old factory to get information out of her after the events of the last season. In the midst of all that, a cult called Infinity is killing people incessantly to give them 'mukti.' The outfit is run by Anant/ Mrityu (Vijay Raaz) and his followers. How Abhay busts the cult is what the season is all about.

Abhay till last season followed a simple story structure of one crime solved every episode. It ranged from hate crimes to psychopathic killing to planned murders. The way Abhay and his solved these crimes were always the highlight of the series. The episodic framework gets a rest this time round but the investigative procedures continue to be interesting. The way Abhay assess and analyses every clue is very neatly shown. The pace is one other best bit about the series and that continues to be an asset here too.

But unfortunately all the good part ends here. The whole premise of involving an outfit who believes in killing people for freedom of soul has been handled in a very caricaturish way. There's a flesh-eating psychotic human who tears apart people as he imagines hearing 'Mujhe mukti do' (set me free), the whole plot of three reincarnations of death, how the main guy was controlling his followers to commit these murder or how he was convincing them to be sacrifice themselves - nothing is explained properly.

After the first episode, the investigation also loses steam as Abhay is now just focused on figuring out about the cult. It does pick up a bit when Khushboo finally gets her hands on the evidence against Abhay and confronts him. In fact, the whole Khusbhoo-Sonam fight is quite unique to watch but you will feel as if that was only done to keep the seasons aligned.

Some of the scenes will even make you question the way it is written. For example when a one of Abhay's associates gets mauled by the flash-eating human, his team members were all in close proximity and even hear him shoot at it. But nobody rushes to help him immediately. Mind you, the associate doesn't go down without a fight so, there's ample time for them to reach the spot.

Performances are decent. Kunal Kemmu as Abhay proves time and again how fit he is for the role. He keeps it controlled even though the character has a highly chaotic mind. Nidhi Singh has more to do here than just follow orders and it's quite fetching to watch her do an independent investigation. Her character has always been the star of Abhay's team. The biggest disappointment is the way Vijay Raaz's role is written. He plays one of the avatars of death and apart from sermonising his dialogues, there's hardly anything worth noticing. That stone-eye is reminiscent of so many outlandish 90s villains and more recently Akshay Kumar in Bachchan Pandey. Abhay 3 Stars Asha Negi and Vidya Malvade Open Up About the Supernatural Experience in Real Life.

-whatever little investigation is shown

Abhay 3 tries to digress from the narrative of the earlier seasons by putting more emphasis on one case rather than being an assortment of many. Guess that was its biggest mistake. Abhay 3 streams on ZEE5.

(The above story first appeared on LatestLY on Apr 08, 2022 09:36 PM IST. For more news and updates on politics, world, sports, entertainment and lifestyle, log on to our website latestly.com).