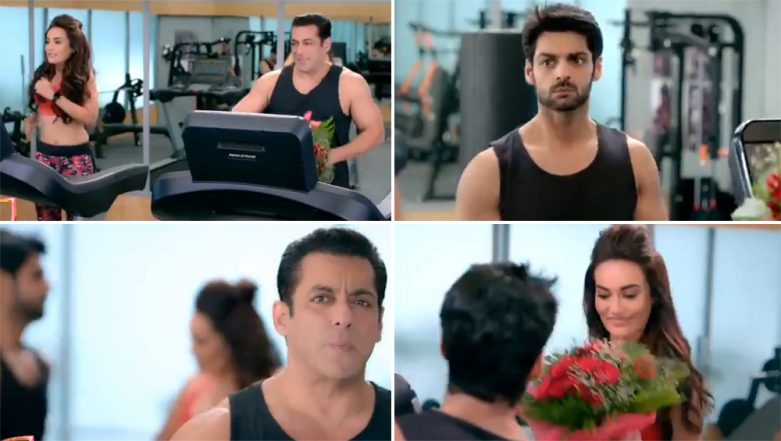 The 13th season of the controversial reality shows Bigg Boss, which will be hosted by Dabangg actor Salman Khan, might be months away from its air date but it has already started to create a lot of buzz. From speculations around the names of the participating contestants to how much Salman is being paid to host the latest season, Bigg Boss 13 has been grabbing eyeballs and making a lot of headlines. Recently, the makers shared a promo, where Salman was seen sporting a station master uniform, and the fans of Bhaijaan were jumping with joy seeing their favourite star returning with their favourite show. Today (September 1), the makers of Bigg Boss 13 dropped another promo online, featuring Salman, Surbhi Jyoti and Karan Wahi. I am sure, fans are excited and impatient for the show already! Bigg Boss 13 Promo Out! Salman Khan Announces That New Season Will Only Run For 4 Weeks (Watch Video)

Bigg Boss 13 makers took to the micro-blogging site to share the promo, where Salman can be seen flirting with Surbhi as they workout at the gym. He hands Surbhi a bouquet of flowers, while Karan, who get jealous, walks up to Surbhi and snatches the bouquet from her. Miffed Surbhi hits Karan to have spoiled the moment. Salman Khan Posts Video of a New Project! Is It Bigg Boss 13 or Nach Baliye 9?

Sharing the video, Bigg Boss' official handle wrote, "High speed dhamaka aur celebrities ke glamour ka tadka! Sab hoga iss season on @biggboss along with @Vivo_India @BeingSalmanKhan @SurbhiJtweets @karan009wahi #BB13 #BiggBoss13 #BiggBoss Anytime on @justvoot" In the video, Salman also revealed that the upcoming season would feature only celebrities as contestants, who will get a chance to reach the finale in just four weeks. Bigg Boss 13 Host Salman Khan to Be Seen As a Station Master in the New Promo?

Meanwhile, the new season of Bigg Boss will be entirely shot at Filmcity, Goregaon unlike Lonavala every year. According to reports, season 13 will start airing from September 29. Bigg Boss 13 Contestants List Leaked: From Ankita Lokhande to Chunky Pandey, These 23 Celebrities Will Battle It Out in the House

A web portal quoted their source as saying, "They have officially discussed the date in the team, and usually September-October is when they look to begin. BB13 will start telecasting from September 29 this time and given that the show is usually a 15-week affair, the Grand Finale is expected to be around January 12, 2020." Stay tuned to this space for more updates on Bigg Boss 13.