Crackdown Review: Iqbal Khan And Shriya Pilgoankar Do Their Best To Keep This Mundane Espionage Thriller From Falling Apart

Voot Select comes with yet another original show Crackdown that marks Apoorva Lakhiya's digital debut and stars Saqib Saleem, Shriya Pilgaonkar, Iqbal Khan, Ankur Bhatia, Rajesh Tailang, Waluscha Dsouza. It's more of revision of anything and everything we have watched in such espionage thrillers over the years. 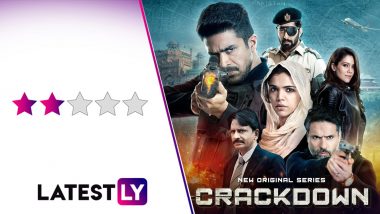 Crackdown movie review: Terrorism as a genre in movies have been wildly used. It hardly has any new angle to it apart from agencies running helter-skelter to thwart a terror plot. Crackdown is just an addition to the same league of movies with the usual tropes like deceit, betrayal, double agents, spies, hackers, and of course RAW agents.  Directed by Apoorva Lakhiya, who also debuts on the digital medium with this series, it stars Saqib Saleem, Shriya Pilgaonkar, Iqbal Khan, Ankur Bhatia, Rajesh Tailang, Waluscha, and others. Crackdown’s First Look Out: Apoorva Lakhia’s Digital Debut Stars Saquib Salem, Iqbal Khan and Shriya Pilgaonkar In An Espionage Drama

Saqib plays Riaz Pathan or RP, as he is fondly and not-so-fondly known in RAW. He belongs to the agency's special OPs team that carries out sneaky missions to nab terrorists. One such mission ends up in the death of a civilian about whom they had no intel. It's Mariam (Shriya Pilgaonkar) who jumps to her death after their terrorist hideout gets busted. When RP's senior Ashwini (Rajesh Tailang) sees her photo he realises something. Enters Divya, Mariam's lookalike, played by Pilgaonkar again. RP trains her to become a terrorist so that she can infiltrate a gang and reach their target Hamid (Ajay Choudhary). In the midst of all this, Zorawar (Iqbal Khan), another RAW agent, is out to shut down this team by hook or by crook. He goes poking around RP's cases to prove that he has liaisons with Pakistan as he was once captured and tortured there. He had run away from there and Zorawar finds it difficult to buy that.

While they manage to get Hamid, it activates many sleeper cells and leads to a blast in RAW's secret office.  It kills most of RP's associates and also Ashwini but he gets saved when Divya makes a frantic call to him for her life. Now the man who busts terrorist plots has become the prime suspect of a terrorist attack. What happens next forms the rest of the plot.

Crackdown is like any other movie on terrorism. You have some scheming agents from Pakistan who is aided by the ISI in their mission. There isn't anything that we haven't seen before. In fact, the plot becomes so mundane that you can even predict what the characters will say in the next scenes. However, the whole subplot of politics inside RAW does give a little fresh perspective but then it's very shabbily treated.

The series takes a long time to pick up pace even though there are RAW agents in action. It doesn't give you a rush at all. Things get slightly better when the first blast happens and you aren't sure who to trust anymore. But then again the momentum continues to fluctuate. If you find yourself browsing your phone while RP looks for clues for the terrorists' next plan, you know where all of this is heading.

What also pains me is the way some sequences are executed. A terrorist who the RAW agents had failed to capture once, saunters in at the airport without any disguise. Nobody spots him or suspects him. Shouldn't he be on the wanted list all the time? A major character waits for her turn without initiating anything just so that the twist seems sudden and shocking. Oh and there's a T-shirt ripping scene, ala Salman Khan. The only difference is it didn't just shred into pieces by itself! Poor dubbing also mires the experience as it sounds like an out of body experience and not in a good way.

Iqbal Khan's Zorawar is the most annoying yet the best character in the show. His incessant need to prove RP wrong has been brilliantly performed by Khan. But the problem is it is so poorly written that it ends up being just another side character. Why does he move around looking forever angry? What is his beef against the special ops team? Zorawar behaves badly to everyone, starting from his wife to his colleagues. He doesn't even seem too happy about his own kid. Is it just anger issues or the writer forgot that such behaviors need some explanation? Towards the end of it, he is the one taking orders from others. It's quite frustrating to see that a character which could be the strongest one in the series, ends up being just another one. Iqbal Khan does deserve a lot of applause for making it count despite all the discrepencies.

As for other performances, Shriya Pilgoankar is such a natural with stunts. The scene where she leaves a lech black and blue all by herself is perhaps the best moment in the entire show. Saqib Saleem lacks intensity which he tries to compensate with his action skills. But that's not enough. Waluscha is usual while Rajesh Tailang needs more screen space for his character to make a mark.

Final Thoughts: Crackdown doesn't add any fresh perspective to how terrorists carry out their missions in India or how RAW intercepts them. But Iqbal Khan and Shriya Pilgoankar's performance manage to keep mildly interested till the last episode.  It ends with a promise of some more action, wonder if that will make anyone excited. The show is streaming on Voot Select.

(The above story first appeared on LatestLY on Sep 23, 2020 11:00 AM IST. For more news and updates on politics, world, sports, entertainment and lifestyle, log on to our website latestly.com).