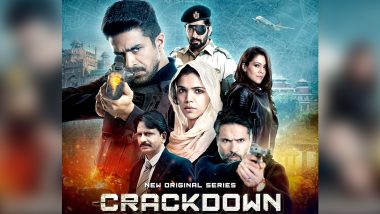 Voot Select, after their commendable series, The Gone Game, is all set to release their next original series. Titled Crackdown, the story is a fast-paced espionage thriller. Crackdown, a slick, high-octane, action-fueled show, revolves around a covert operations wing that tries to dismantle various smaller decoys to uncover a larger conspiracy that threatens national security. In the process, they find an able ally in a girl whose identity remains a mystery. The Gone Game Review: Sanjay Kapoor, Shriya Pilgaonkar and Shweta Tripathi Star in This Inventive Thriller That Smartly Plays Within Lockdown Rules.

Check Out the Poster Below:

The series also revolves around a simple Maharashtrian girl Divya (Shriya Pilgaonkar), who is forced to become a part of the dangerous mission owing to her resemblance to an extremist. Happy Birthday, Shriya Pilgaonkar! Moody Floaty and Sublime Femininity Define Your Delightful Fashion Arsenal!.

And excited Shriya Pilgaonkar, in a recent chat with IANS, revealed, "I love action thrillers and it's a genre I've always wanted to explore so I was obviously excited to be part of Crackdown. I really enjoyed the process of training with the action team for over a month to work on my basics which are extremely important. My action sequences were mainly hand-to-hand combat so that was the focus of my training."

(The above story first appeared on LatestLY on Sep 10, 2020 12:06 PM IST. For more news and updates on politics, world, sports, entertainment and lifestyle, log on to our website latestly.com).