The two are often spotted together on dates, outings and whatnot. The two now even feature on each other's Instagram handles as well. The fans are elated to see their relationship grow so beautifully. 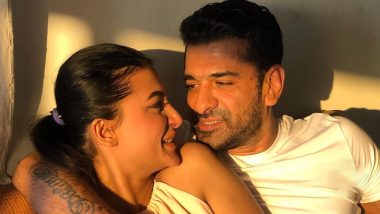 Eijaz Khan and Pavitra Punia are painting the town red with their love. The television actor who met on the reality show Bigg Boss 14 are made in love with each other. What kindled as a liking for each other in the BB house, is now blooming into strong love. Eijaz has often expressed his feelings on the show and was really happy to see Pavitra back in the house for an episode. It was then when they confessed their love for each other and are having been having the time of their lives. Eijaz Khan Shares a Cosy Picture With Girlfriend Pavitra Punia, Says ‘I Love You One Million’.

The two are often spotted together on dates, outings and whatnot. The two now even feature on each other's Instagram handles as well. The fans are elated to see their relationship grow so beautifully and often question the duo about their wedding plans. While the fans want the couple to get hitched soon, Eijaz has revealed that they dont have a wedding on their mind currently. Talking to Bollywood Hungama, Khan said he wants to keep things related to his relationship very personal moving forward.

He said, “Now this is like a public marriage, we need to inform everyone whatever happens in our lives. I need to share where we are staying, whether we are staying together. And, I am a very private person!” Eijaz further said, “I wanted to make Pavitra secure, I wanted to show to the world that my intentions are very Pavitra, so did that (talked about relationship openly)." Bigg Boss 14: Pavitra Punia Will Meet Eijaz Khan’s Family to Talk About Each Other’s Marriage Plans?

He added that there is nothing to hide about the relationship but he prefers to not talk about it. "But, now we would want to keep personal, whatever personal things happen. I do not want to put a date on it, I do not want to tell people what are we going to do. Whatever happens and whenever it happens, you will all get to know,” said the former BB contestant.

Pavitra was also sitting for the interview and she went on to talk about how her life has changed for better after Eijaz's entry. She said that she found stability in the relationship. “After meeting Eijaz, zindagi me ek thehrao aya,” she stated. She also spoke about her experience in the Bigg Boss 14 house and said, “After spending time in that house, aapko aate daal ka bhao pata chal jata hai. What you need to correct and what you are doing wrong in life.” The two have undeniably amazing chemistry, so we cannot wait to see when they put a ring on it.

(The above story first appeared on LatestLY on Mar 18, 2021 12:00 PM IST. For more news and updates on politics, world, sports, entertainment and lifestyle, log on to our website latestly.com).