Bigg Boss 14 contestant Eijaz Khan is temporarily out of the controversial reality show and is not leaving any chance to spend time with his special lady, Pavitra Punia. Eijaz says Pavitra has already met his brother and is all set to meet a few other members of his family. 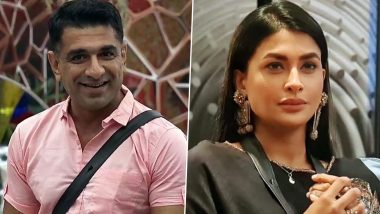 Bigg Boss 14 contestant Eijaz Khan is temporarily out of the controversial reality show and is not leaving any chance to spend time with his special lady, Pavitra Punia. Eijaz says Pavitra has already met his brother and is all set to meet a few other members of his family. Talking about his romance blooming with Pavitra in the house and on his plans to take the affair forward, Eijaz told IANS: "Well, it was real then and it is real now." Bigg Boss 14 Weekend Ka Vaar Preview: Eijaz Khan Proposes Pavitra Punia to Spend the Rest of their Lives Together, the Actress Seals the Deal With a Kiss

He adds: "She is the only person I am spending the most amount of time with, and I want to. I have met my dad and brother and they are very happy. My brother has met her, and today a small part of my family might meet her because we might just go out for an ice cream or something." Pavitra is keen to meet Eijaz's side of the family, he says. "She wants to meet them, they want to meet her. They are very, very curious about who is caring for Eijaz and who is keeping him happy. I want them to know who Pavitra is," he said. Bigg Boss 14: Eijaz Khan Confesses He Loves Pavitra Punia, Asks Her To Wait For Him (Watch Video)

The actor, who is known for his work in shows such as Kahiin Toh Hoga, Kyunki Saas Bhi Kabhi Bahu Thi, Kyaa Hoga Nimmo Kaa and Kkavyanjali, is temporarily out of the Bigg Boss 14 house because he has to complete the shoot of his web-series "City Of Dreams 2". Describing his journey in the show, which lasted over 100 days, an emotional Eijaz said: "(I am) Overwhelmed with all the love till processing. (I am ) Still overflowing with gratitude that people got to know the real me. It has been tough and it has not been easy but it has been worth every tear."

Ever since his temporary exit from the show, it has not been easy for Eijaz, as he has been busy with an erratic shoot schedule. "I came out of the house the same evening I met my dad and the same night I went for my costume trials. The next morning we did a look test and I started shooting at 5am, and shot till 10. My mind is still in the Bigg Boss game!" He added that he had to consciously eradicate the Bigg Boss hangover because he is committed professionally. "I will give my best to this project that I am focussing on right now but at a subconscious level I am still in the (Bigg Boss) game," he summed up his current mood.

(The above story first appeared on LatestLY on Jan 21, 2021 01:56 PM IST. For more news and updates on politics, world, sports, entertainment and lifestyle, log on to our website latestly.com).