Hello Charlie Actor Aadar Jain: I Have a Responsibility Towards My Work but I Don’t Feel Any Pressure That I Have To Achieve

Aadar Jain says he does not feel the pressure to deliver in the same way that his maternal grandfather, the legendary Raj Kapoor, did. He is also upbeat about his upcoming comedy Hello Charlie. Hello Charlie is slated to drop on Amazon Prime Video. 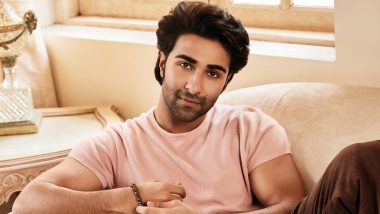 Aadar Jain says he does not feel the pressure to deliver in the same way that his maternal grandfather, the legendary Raj Kapoor, did. He is also upbeat about his upcoming comedy Hello Charlie, adding that rumoured girlfriend Tara Sutaria says it is one of her favourites. Hello Charlie Trailer: Aadar Jain and Jackie Shroff’s Adventure-Comedy Film Is Full of Fun (Watch Video).

"I have a responsibility towards my work but I don't feel any pressure that I have to achieve so much or I have to deliver in some way that my grandfather probably did in his films, the kinds of films that he made or whatever. There is no pressure from my family or my parents' side. The fact that I exist in this industry and do what I love, which is acting in Hindi cinema, I think in itself is something that my family takes a lot of pride in," Aadar told IANS. Hello Charlie: Aadar Jain Claims That He Got a Once-in-a-Lifetime Role in the Comedy.

Aadar made his Bollywood debut with Habib Faisal's 2017 film Qaidi Band. The film failed to leave a mark, and his next screen appearance is the upcoming digital film Hello Charlie, slated to release on April 9.

Why this gap between the two films? "My first film came out in 2017 and then in 2018 I met (Hello Charlie producer) Ritesh (Sidhwani) sir and (director) Pankaj (Saraswat) sir, and I auditioned. We started shooting in 2019 but because of this pandemic I feel there is an even bigger gap. 2020 just went by without you knowing. So it is not really in my hands that the film came out late," he said.

In the film, Aadar plays Chirag Rastogi or Charlie, a simpleton hailing from a small town of Gujarat. Sharing his experience of shooting with a gorilla in the film, the actor said: "I had to learn how to be with a gorilla (Toto). I had to hang with it and chill with it. He had his handlers with him but I was scared. I am an animal lover and have been to many safaris in my life but to see an animal far away and to work with it up close and to be next to it is very scary."

Aadar also opened up on rumoured girlfriend Tara Sutaria's reaction after watching the film. He said: "She has seen the movie and she has really, really loved it. I think she spoke to Pankaj sir also and told him what she felt. She loved all the characters, (the film's heroine) Shlokka Pandit, the script and the fact that it is so unique and one of a kind. She's just saying already that it is one of her favourite movies!"

Qaidi Band and Hello Charlie are completely different kinds of films. What kind of genre would he like to take up next? "I have always said that I am a big fan of cinema as a whole and it includes all genres. So for me it's not ‘pick and choose'. Both the films that I have done, have chosen them from my heart, what my gut has told me. Going forward I think I am only going to do films which I can connect to, whether it is the same genre, different genre, something very hatke (offbeat) or something serious, I don't know but it has to come from within," he replied. Hello Charlie is slated to drop on Amazon Prime Video.

(The above story first appeared on LatestLY on Apr 05, 2021 12:47 PM IST. For more news and updates on politics, world, sports, entertainment and lifestyle, log on to our website latestly.com).