After getting kissed by a random man on the show, Indian Idol 11 judge Naha Kakkar now falls flat on the stage while dancing. Watch the viral video for yourself! 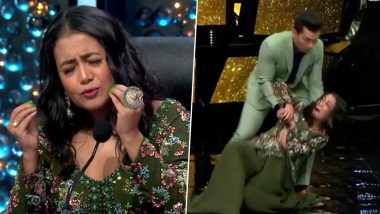 The singing reality show, Indian Idol 11 has been in the news for all wrong reasons. From fans and celebs bashing the show for having the #MeToo accused, Anu Malik as a judge this year to a random man forcibly kissing singer Neha Kakkar without her permission, the show has been making headlines from quite some time now. Well, now the show is back in the news, thanks to Neha Kakkar. It so happened that the makers of the show shared a promo video which sees Kakkar dancing with host Aditya Narayan and what happened next will make you go LOL. Indian Idol 11: Neha Kakkar Forcefully Kissed By Contestant, Netizens Feel Move Was Scripted for TRPs.

Going by the video, an excited Neha and the host of the show Aditya were in some mood to dance and in no time the former broke into some sizzling moves on the stage. Neha was seen dancing with Aditya on her chartbuster song "Dilbar." The two were really enjoying the dance until Aditya who had to grab Neha lost his grip and she fell flat on the floor. Known to be a cry baby, Neha took the fall jokingly and laughed at the incident this time. This particular video has gone viral on the web. Indian Idol 11: Neha Kakkar Left Baffled after a Contestant Forcibly Kisses Her on Stage.

A post shared by Sony Entertainment Television (@sonytvofficial) on Nov 8, 2019 at 9:19am PST

Well, indeed quite a fun fall Neha had which was captured on the camera. Recently, Neha had made headlines when she was kissed by a contestant on the show. Speaking of which the host of the show, Aditya in an interview with a leading publication said: “You can’t really foresee these things. It’s not a normal thing. Judges have come on stage a thousand times. I am sure he didn’t mean it in an inappropriate way. I understand what it is to have fans who are obsessed. I know this man has a tattoo of Neha on his hands. So in some way this man must have immense love for her. You kind of feel for them as well. But you need to make them aware of where to draw the line.” Stay tuned!

(The above story first appeared on LatestLY on Nov 11, 2019 05:30 PM IST. For more news and updates on politics, world, sports, entertainment and lifestyle, log on to our website latestly.com).