Two men; One provides food and the other works towards the betterment of kids through sports. All for the underprivileged, with no complaints and no demands. 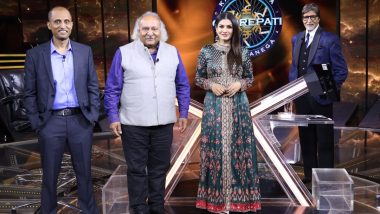 Sony TV's game show Kaun Banega Crorepati 12 continues to salute social workers who have selflessly done their part for the betterment of the society and set an example for many out there. This week, the show raises a toast to the efforts of Noida-based Anoop Khanna, and Delhi-based Sylvester Peter for their selfless work towards the nourishment and upliftment of the needy, through the upcoming Karamveer episode of the show. Kaun Banega Crorepati 12: Mika Singh is on Cloud Nine After Amitabh Bachchan Reveals Himself to be a Fan of His 'Adhbhut Awaaz' (Watch Video).

Khanna, with support from his family, has gained prominence for his venture, 'Dadi Ki Rasoi', which is born out of his mother’s wish to serve food to the needy. Initially, food was prepared for 15-20 people and served from their own house, but now Khanna manages to feed 400-500 people a day through a stall in Noida. He offers meals at a nominal cost of Rs 5, tackling the problem of hunger effectively. Kaun Banega Crorepati 12: Boman Irani Steals the Show by Helping Ranjit Disale, The Global Teacher Award-Winner with These Tough Questions.

Peter, on the other hand, has been working towards reforming slum children through the game of football, via his 'My Angels Academy' which he started 34 years ago when he was all of 13 years old himself. Fondly known as Sylvester Bhaiya, he has been forging the dream of rendering an all-round development environment to the slum kids near VikasPuri in New Delhi, free of cost.

The two Karamveers will have actor Raveena Tandon, who adopted and raised two girls in 1995 herself, as their celebrity champion on the show hosted by megastar Amitabh Bachchan. Well, excited?

(The above story first appeared on LatestLY on Jan 08, 2021 08:01 PM IST. For more news and updates on politics, world, sports, entertainment and lifestyle, log on to our website latestly.com).