MTV Roadies Xtreme Written Episode Update, May 6, 2018: Raftaar Feels Deceived After Being Chucked Out of Race For Immunity

Neha Dhupia disagrees with Rannvijay on the twist after the task 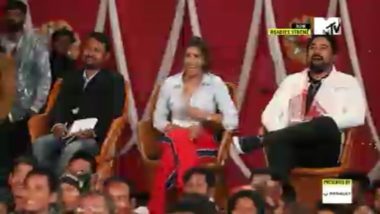 Today's episode of MTV Roadies Xtreme continues with the performances at Kazhiranga as it is now the turn of Nikhil Chinnapa's team. Nikhil walks in to impress the gang leaders who sit trying to make their acts very right. Nikhil is asked to give a ball room performance and he nails it to the "t". Nikhil and team give in a lovely performance as they enact the Kabh Khushi Kabhi Gam in a fun way. Mehakdeep and Shubda also perform to pani da. Shruti performs some fun acrobatics as she enacts the iconic POO. In all the entire Nikhil Chinnapa team act is an amazing dance performance but misses in on incorporating Bihu in it.

Next is Prince Narula's performance and they have in mind a Gabbar performance. The Gabbar seems to have trouble in counting and a confusion follows. The entire performance is fun and a laughing riot. Prince is a treat to watch as he engages the crowd totally with his act and his dialogues. There is a balance between dance and act in the performance as the crowd is seen to go mad over the team. They have Bihu incorporated in the act too.

Raftaar's gang walks in next as the theme making of a film in Assam as Raftaar speaks in Assamese too. The other gang leaders get nervous. Sonu is seen in a female get up leaving everyone in splits. The entire performance is a boring drag as it goes on and on never ending. Raftaar gives  small item number performance towards the end and Raftaar tries to engage the crowd by going amidst the crowd. The Bihubali task moves to an end. Gillan announces a special reward for the cutest performer and the one is none other than Sonu. Rannvijay commends Nikhil's performance and says that he performed out of character.

Rannvijay says that the gang leaders have the power to get one of the team out of the race for immunity and that should be a unanimous decision of the four gang leaders. The teams discuss with each other. Also Prince, Nikhil and Neha discuss with each other too. They all are of the opinion that Raftaar's gang did not perform Bihu and so they should chuck him out. Raftaar's team is chucked out of the race on the basis of no Bihu and also that he had a strong point with him speaking in Assamese. Rannvijay announces that the winner as per the judges was Raftaar and makes them feel even more bad. The winners are announced to be Prince's gang as they win the immunity.

(The above story first appeared on LatestLY on May 06, 2018 07:39 PM IST. For more news and updates on politics, world, sports, entertainment and lifestyle, log on to our website latestly.com).