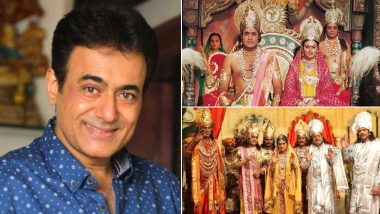 Ramayan and Mahabharat returned to television amidst the on-going lockdown period. And while it was a welcome change in terms of content viewing and both these Doordarshan epics even topped the TRP charts, as many revisited the good ol' 90s days. The return of the two shows to television also re-ignited the hot debate of whether or not the stories of Ramayan and Mahabharat ever existed in real life. Yea... remember the whole Ram-Setu bridge issue? Ramayan on Star Plus and Mahabharat on Colors: Here's The Telecast Time and Schedule for the Re-Run of the Doordarshan Shows (View Tweets).

However, actor Nitish Bharadwaj, who became the most loved Krishna on television and a popular name in the industry post-Mahabharat, is of the opinion that since there is enough proof that Ramayan and Mahabharat existed thousands of years ago (some say 3000-4000 years), the shows should be called 'Historicals' as opposed to 'Mythologicals'. As Ramayana and Mahabharata Return to Doordarshan, Amul Brings Back Old 90s Ads Playing Tribute To These Shows (Watch Video).

"According to the oceanographic excavations that took place at Dwarka, there is substantial proof that Lord Krishna existed and so did the Pandavas. So, when these things have been proven, they should be a part of history, and not be referred to as mythological stories," states Nitish Bharadwaj.

It can be recalled that back in 2007, the whole Ram-Setu bridge connecting India and Lanka issue had sparked a huge debate on whether the bridge was constructed by Ram and his Vanar Sena or was man-made years later.

(The above story first appeared on LatestLY on Jun 05, 2020 09:08 AM IST. For more news and updates on politics, world, sports, entertainment and lifestyle, log on to our website latestly.com).