OTT Releases Of The Week: Justin Hartley’s This Is Us Season 6 on Disney+ Hotstar, Ben Affleck’s The Tender Bar on Amazon Prime Video and More

From Justin Hartley’s This Is Us Season 6 on Disney+ Hotstar to Ben Affleck’s The Tender Bar on Amazon Prime Video, Let's take a look at every upcoming OTT release of the week. 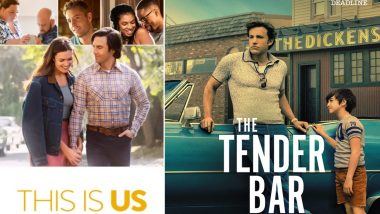 The new year brings some exciting OTT releases lined up for release including This Is Us Season 6 that premieres on Disney+ Hotstar on January 5 in India. The show fans can't wait for the season finale of the NBC hit show and they can witness it exclusively right when the episode premiere in the USA on January 4. The next big release coming up this week is George Clooney's The Tender Bar starring Ben Affleck in the lead arrives on Amazon Prime Video on January 7. Interestingly, Ben Affleck was nominated for the Golden Globe Award for Best Supporting Actor in Motion Picture category for the movie. Human Trailer: Shefali Shah, Kirti Kulhari’s Gripping Medical Thriller to Premiere on Disney+ Hotstar on January 14 (Watch Video).

(The above story first appeared on LatestLY on Jan 03, 2022 10:22 AM IST. For more news and updates on politics, world, sports, entertainment and lifestyle, log on to our website latestly.com).