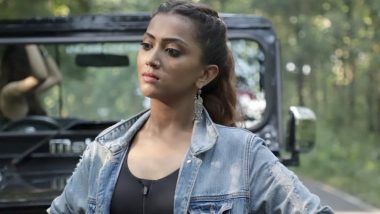 Anindita Bose, who plays a pivotal role in the new web series "Mafia", says being a Mumbai girl she has to float between the city and Kolkata to maintain her space as an actor in the Bengali entertainment industry. "I would say I am floating in between Mumbai and Kolkata. I was born and brought up in Mumbai, and after finishing my education I went to Kolkata and started my career as an actor. I have got a huge response. The people of Kolkata has accepted my and they made me the celebrity that I am today. How can I not reciprocate to their love? But my heart is in Mumbai! Mumbai is home. Breathe Into The Shadows Review: Here’s What Critics Are Saying About Abhishek Bachchan, Nithya Menen, Amit Sadh’s Thriller Series On Amazon Prime!

Having said that, last year I bought my first property in Kolkata because I know that no matter where I travel, I would like to return to this city. So, my heart is in Mumbai, the mind is in Kolkata," Anindita told IANS. Starting her career in 2010 with the show "Gaaner Oparey", her notable roles have been in films like "Clerk", "Bhooter Bhabishyat", "Hemlock Society", "Cakewalk", "Shotoroi September". "It is great to notice how even the Bengali audience is becoming receptive towards digital content. There are Bengali language web series that have become popular. These mostly cater to the youth here and surely more experimental work will be happening," added the actress. Avrodh – The Siege Within Trailer: Amit Sadh’s Thrilling Web Series Attempts to Reveal the Real Story Behind Uri Surgical Strike (Watch Video)

Anindita has also appeared in Hindi web series like "Paatal Lok", "Skyfire" and "Thinkistan", before "Mafia". Is she planning to step into the world of Bollywood? "When I started my career, I never planned it. So my idea is to go with the flow and take baby steps. Bollywood is a bigger goal. Over the past three years, a transition has happened with so many OTT platforms making web shows with actors from every region. I also auditioned for a couple of them. I got rejected by some. I was a part of a few shows before my major role in 'Mafia'. Hopefully, more projects will come on my way after this show," said Anindita. The Zee5 show "Mafia" also features Namit Das, Tanmay Dhanania, Isha M Saha and Madhurima Roy.

(The above story first appeared on LatestLY on Jul 13, 2020 11:46 AM IST. For more news and updates on politics, world, sports, entertainment and lifestyle, log on to our website latestly.com).