Breathe: Into the Shadows aka Breathe 2, starring Abhishek Bachchan, Nithya Menen and Amit Sadh in the lead, has finally premiered on Amazon Prime. 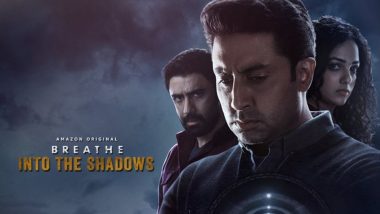 Breathe: Into the Shadows aka Breathe 2, starring Abhishek Bachchan, Nithya Menen and Amit Sadh in the lead, has finally premiered on Amazon Prime. This thriller series was one of the much-awaited shows as it marks the digital debut of Abhishek and Nithya. The posters, teaser and trailer of this Amazon Original had already dropped the hint that the story revolves around psychiatrist Dr Avinash Sabharwal (AB), who is ready to go to any extent in search of his missing daughter named Siya. The six-year-old is kidnapped by a mysterious masked man. Breathe Into the Shadows Review: Abhishek Bachchan, Amit Sadh and Nithya Menen Bring Their A-Game in This Engrossing Thriller Series.

From critics to fans, one couldn’t wait for Breathe: Into the Shadows to hit the OTT platform. After watching the promising trailer of this series, the expectations were sky-high. The reviews of Breathe 2 are out and you got to take a look at what the critics have to say about the performance of the star cast, the direction, screenplay, background score, and much more. Breathe Into The Shadows: Abhishek Bachchan Introduces His Onscreen Wife Nithya Menen With This Intriguing Teaser Video.

Hindustan Times - By leaning far too heavily on the crime thriller aspects of the show, writer-director Mayank Sharma completely dilutes the family drama. By turning Avinash into a remorseless killer, he robs the story of any redeemable characters.

Koimoi - Breathe: Into The Shadows is nothing extraordinary on the OTT but it has got its good share of chills and thrills which surely keep you entertained.

Pinkvilla - The concept of Breathe: Into the Shadows is intriguing but the lack of substance to explore and leisure pace acts like a spoilsport. There are a few edge-of-the-seat moments that pop up a couple of times to entice the viewer but the uneven storytelling shove those moments into the shadows faster than you think.

Mashable India - The show with the kind of buzz around will make it your watch-list and it won’t be a bad watch, if I may say casually. Abhishek Bachchan also bets it all and takes a deep-dive into the world of OTT but it won’t challenge you and satiate you after like a few recent crime thrillers in the same space have.

Wion - It was not only the emotional aspect that's missing, but even the mystery and suspense created is not that great. What the audience expects from a thriller are nail-biting scenes and gripping plot points but we bearly get to see any of that.

So, Breathe: Into The Shadows have opened to mixed reviews from critics. Directed by Mayank Sharma, the series has won praises for the performance of the star cast, but looks like it couldn’t be the engaging thriller as one expected it to be. If you have watched Breathe 2 on Amazon Prime, share your views with us in the comment section below.

(The above story first appeared on LatestLY on Jul 10, 2020 09:46 AM IST. For more news and updates on politics, world, sports, entertainment and lifestyle, log on to our website latestly.com).