Avrodh - The Siege Within will see Neeraj Kabi play the role of Ajit Doval while Vikram Gokhale will portray Prime Minister Narendra Modi. 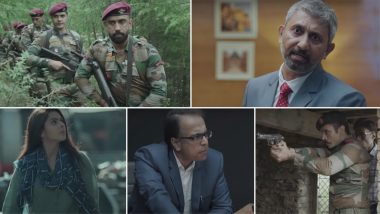 Check out the trailer of Avrodh - The Siege Within (Photo Credits: YouTube)

Is your josh still high? Can you not stop praising Vicky Kaushal's brilliant act in Uri: The Surgical Strike? If yes then SonyLIV's next production is bound to catch your attention. Titled Avrodh - The Siege Within, the new web series from Sony's OTT platform revolves around India's surgical strike against militant launch pads across the Line of Control in Pakistani-administered Kashmir. While the movie had Kaushal as lead, the series will see Amit Sadh heading the mission. Amit Sadh on the Outsider-Insider Debate: We Should Devote More Time for Debating on Other Important Topics.

The series, however, claims to reveal the real story behind the country's surgical strike. While the core remains the same, its execution and storyline will differ keeping in mind the untold account that they are referring to. It promises you enough thrills and moments that will make your chest swell with pride. The ongoing month is quite exciting for all Amit Sadh fans for they'll get witness his powerful performances in two different web series. After Breathe 2 on Amazon Prime, the actor will shine in Avrodh by SonyLIV. Amit Sadh Reminisces His Decade Long Bollywood Career, Says ‘This Journey Has Been a Learning Curve for Me’.

You won't have to wait really long to catch Avrodh online as the series starts streaming from July 31. So get ready to witness the exciting chapter once again and we hope it's able to taste a similar success like the 2019 release.

(The above story first appeared on LatestLY on Jul 09, 2020 08:39 PM IST. For more news and updates on politics, world, sports, entertainment and lifestyle, log on to our website latestly.com).