Nope, Priyanka Chopra is not playing a superhero in Netflix's We Can Be Heroes but she's, in fact, playing a baddie in the same. It's a kids superhero movie and she plays their nemesis. It's kinda sad but thrilling as well. 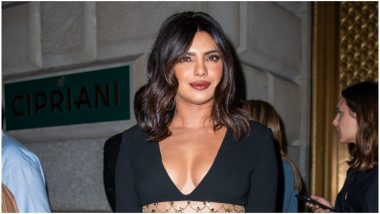 Priyanka Chopra to play a villain in Netflix's We Can Be Heroes (Photo Credits: Instagram)

Seems like Priyanka Chopra loves playing grey characters and she's all game to play a baddie on the big screen. After all her first successful Bollywood movie that earned her recognition was Aitraaz with Akshay Kumar and Kareena Kapoor Khan, where she played the main antagonist. Post which her love for such characters only got deeper with time and she ended up signing Saat Khoon Maaf and her Hollywood debut, Baywatch of course. And thankfully, she isn't done yet.

The Quantico star is all set to play an arch-enemy in her first-ever superhero outing for Netflix. Remember the news about PeeCee signing a superhero movie, We Can Be Heroes, for the OTT platform? Well, turns out the actress won't really play a hero but a villain in the same. Priyanka in her recent chat with MTV News for The Sky is Pink promotions at TIFF revealed a gist of what we can expect from her next big project.

You can watch the interview here

When asked about this Robert Rodriguez directorial, Priyanka said that she has always loved his work and working with him for We are Heroes has been a great opportunity. It's a kids superhero movie and she plays their nemesis. She has worked with 11 kids on this project and they were an incredibly talented lot. She further clarified that though the movie has a superhero aspect to it, it's not really connected to her. So yea, as she says, we still have to tick that box for her.

We are damn excited to see what Priyanka has in store for us with her new negative character and if it will be as good as her previous ones.

(The above story first appeared on LatestLY on Sep 11, 2019 03:44 PM IST. For more news and updates on politics, world, sports, entertainment and lifestyle, log on to our website latestly.com).

Comments
Tags:
Netflix Priyanka Chopra Robert Rodriguez The Sky Is Pink The Sky is Pink promotions TIFF 2019 We Can be Heroes
Comments
You might also like