Ramayan: When A Delhi-Patna Train Made An Unscheduled Halt At Rampur For Passengers To Watch Ramanand Sagar's Mythological Show

Ramayan, the timeless classic is once again entertaining viewers all over. The artistic rendition of Lord Ram’s story has enamoured audiences across age groups. Read on. 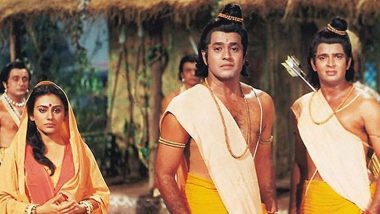 Ramayan, the timeless classic is once again entertaining viewers all over. The artistic rendition of Lord Ram’s story has enamoured audiences across age groups. The show that has been re-airing on Star Plus, after its first re-run on Doordarshan, has been at the top of the TRP charts as well. It’s a well-known fact that this mythological show has successfully created an impression on viewers of all ages and its social strata. And while its the TRP game today, back when the show aired for the first time, it had a fan following of its own, like no other show. Did Doordarshan Air Ramayan Using Moser Baer DVD's Watermark? Here's The Fact Check On Streaming Controversy.

While it is well-known trivia that the entire country would come to a standstill when Ramayan aired on every Sunday, the show earned a loyal audience which made sure to not miss any episode. In fact, train and bus schedukes would be moved around to accomodate Ramayan's telecast every week, such was the love that Ramayan garnered. Doordarshan’s Ramayan Funny Memes: From ‘Iske Pet Par Baan Mariye Prabhu Ram’ to ‘Lakshman’s Expression’, Check Out New-Age Hilarious Jokes on Episodes.

As per excerpts from Prem Sagar's book, ‘An Epic Life: Ramanand Sagar: From Barsaat to Ramayan’, people would postpone and reschedule important events to ensure that no one misses even a single episode of the mythological classic. An interesting incident that the book recollected was about the time when a passenger train which traveled from Patna to Delhi every Sunday would take an unscheduled halt at a station named Rampur and the entire staff along with the passengers would watch Ramayan and then resume their journey!

People would go berserk if there was a power outage when Ramayan would be telecast! It does not come as a surprise that even today audiences are glue to the television sets as the story unfolds about how good triumphs over evil. Ramanand Sagar’s Ramayan has truly broken records in all aspects.

(The above story first appeared on LatestLY on May 26, 2020 05:48 PM IST. For more news and updates on politics, world, sports, entertainment and lifestyle, log on to our website latestly.com).