Rudra The Edge of Darkness: Ajay Devgn Talks About His Character in the Upcoming Web Series, Says ‘Suave, Nuanced and Mindful’ 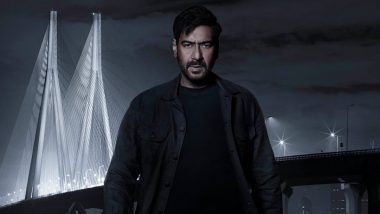 Actor Ajay Devgn has talked about his character in the upcoming web-series 'Rudra - The Edge of Darkness'. He calls it "suave, nuanced and mindful". Asked how he would describe his character, the actor shared, "The concept of Rudra was intriguing for me. Rudra is a smart cop who uses his impeccable mind skills to stay ahead of criminals. He doesn't feel the need to use violence as a weapon. Instead, he is analytical and puts details first. Rudra is suave, nuanced and mindful and that's why I was drawn to him in the first place." Rudra The Edge Of Darkness Trailer: Ajay Devgn Looks Intense In His Debut Web Series; Raashi Khanna, Esha Deol’s Crime-Thriller To Premiere On Disney+ Hotstar (Watch Video).

A remake of the successful British series 'Luther', 'Rudra - The Edge of Darkness' is an engaging and dark take on a cop's journey of uncovering truths and bringing victims justice. It will see Ajay Devgn's titular character of an intuitive and instinctive police officer fighting for the truth in darkness as he wades through a grim and complex web of crimes and criminals and corruption with a wrathful, steely grit. Rudra – The Edge of Darkness: Raashii Khanna Opens Up About Her OTT Debut, Says ‘It’s a Dream Project for Me’.

(The above story first appeared on LatestLY on Feb 26, 2022 09:10 PM IST. For more news and updates on politics, world, sports, entertainment and lifestyle, log on to our website latestly.com).