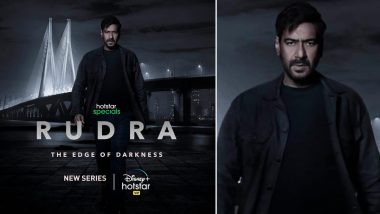 Ajay Devgn, Raashi Khanna, Esha Deol’s psychological crime thriller, Rudra: The Edge Of Darkness, premiered on Disney+ Hotstar today. The web series that marked Devgn’s digital debut has received positive response from fans and critics. Directed by Rajesh Mapuskar, the series features Devgn as DCP Rudraveer Singh. However, the BBC Studios India and Applause Entertainment produced show, has become victim of online piracy. It has reportedly been leaked online and made available in high-definition prints. Rudra The Edge Of Darkness Review: Ajay Devgn’s Disney+ Hotstar Web Series Gets A Thumbs Up From Critics!

Despite issuing several warnings, these sites leak newly released films on their websites. Rudra full series in HD has been leaked on the torrent sites such as Filmywap, Onlinemoviewatches, 123movies, 123movierulz, Filmyzilla, and other pirated versions of the series in HD (300MB free download in 1080p, 720p, HD online) are available for the audience to watch.

Apart from Rudra, there are several other movies and series that have too become the victims of online piracy. It includes the recently released Bheeshma Parvam, Bheemla Nayak, Gangubai Kathiawadi among others that have also been leaked online and made available in HD prints.

(The above story first appeared on LatestLY on Mar 04, 2022 03:01 PM IST. For more news and updates on politics, world, sports, entertainment and lifestyle, log on to our website latestly.com).