After Venom actor Riz Ahmed recently revealed details of his bitter experience, Elnaaz Norouzi narrates her similar encounter. She was detained at Chicago airport and interrogated for three long hours owing to her Iranian origin. The actress even missed her connecting flight and had to wait for six more hours before she could board the next. 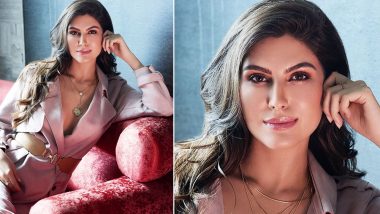 Elnaaz Nourouzi is gearing up for the second season of Sacred Games and is hella excited for the same. While the future looks really promising for her, she recently encountered a bitter experience at Chicago international airport. The actress was detained by officials and their interrogation lasted for as long as 3 hours. We all are aware of the stringent airport rules in the US and how actors of a particular religion are questioned for the same. After Riz Ahmed recently revealed details of his 'horrible' experience, Elnaaz was unfortunate to go through the same.  #MeToo: 'He Touched My Butt, and Dragged Me Towards Himself, Elnaaz Norouzi Accuses Vipul Amrit Shah of Sexual Harassment.

"I had to stay in immigration for more than 3 hours or so and I was stopped by the officers to board my connecting flight. I hold a German passport and so I do not require a visa to travel to the United States. But due to my Iranian roots, I applied for a normal visa as Trump has put some ban on Iranis and they do not get ESTA anymore and that's why they wanted to double-check on everything," she said in her conversation with a portal. Sacred Games Star Elnaaz Norouzi: I Was Born In Iran But I Am 'Made In India' - Watch Exclusive Video Interview!

The actress had a connecting flight from the Chicago airport. However, due to this lengthy interrogation, she had to miss the same. "I was made to wait and they asked a lot of questions and due to the lengthy interrogation session, I missed out on my connecting flight. The next flight was after 6 hours so I had to wait at the airport for quite long and it felt like this journey was never-ending," she added. The actress wants to meet some agents in LA for her Hollywood dreams and she ensures that she'll get it done during this trip.

(The above story first appeared on LatestLY on Jul 23, 2019 01:52 PM IST. For more news and updates on politics, world, sports, entertainment and lifestyle, log on to our website latestly.com).