According to a report in a leading tabloid, this Netflix show featuring Bollywood beauty Madhuri Dixit Nene has been titled as The Actress. 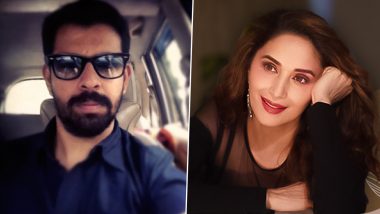 The gorgeous Madhuri Dixit Nene is all set to make her web show that is bankrolled by Karan Johar’s Dharmatic Entertainment. This is a Netflix show that would be helmed by popular director Bejoy Nambiar. This 41-year-old director’s show web drama titled Taish is all set to be released on ZEE5. And now he is all set to collaborate with B-town’s beauty, Madhuri Dixit Nene. Taish Trailer: Harshvardhan Rane, Pulkit Samrat, Jim Sarbh, Sanjeeda Sheikh's Thriller Looks Stylishly Killer (Watch Video).

According to a report in a leading tabloid, this Netflix show has been titled as The Actress. Bejoy Nambiar would be heading to Nashik in early November to shoot for the show. He would reportedly be helming two episodes of this show. About it he told Mid-Day, “I am directing two episodes of the Netflix show, The Actress. Madhuri is one of the biggest idols of Hindi cinema. Naturally, I am thrilled to get a chance to work with her.” 25 Years of Yaraana: Madhuri Dixit Reminisces Working with Rishi Kapoor and Farah Khan, Dedicates this Day to Them.

Sri Rao is the director-showrunner of this Netflix show. Bejoy Nambiar further stated, “I have never worked on a project where somebody else is the showrunner, and I have to fulfil the directorial responsibilities. So, this will be a new experience for me.” Madhuri Dixit Nene had reportedly started shooting for this show in March in Mumbai. But to the coronavirus outbreak and the lockdown imposed, the team had to stall the rest of the shoot. A source had earlier revealed to PTI that this Netflix show would be directed by three different directors and one among them is Bejoy Nambiar.

(The above story first appeared on LatestLY on Oct 24, 2020 08:42 AM IST. For more news and updates on politics, world, sports, entertainment and lifestyle, log on to our website latestly.com).