Tere Bina Jiya Jaye Na Has Been One of the Finest Experiences for Me, Says Anjali Tatrari On Zee TV's Popular Show Going Off-Air!

Tere Bina Jiya Jaye Na is all set to bid adieu to its ardent fans on August 18, 2022. The show will end on a dramatic note with a major twist that will surprise Devraj and Krisha. 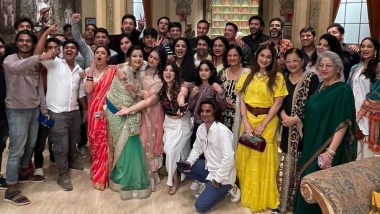 Zee TV’s popular show - Tere Bina Jiya Jaye Na has kept the audience at the edge of their seats since its launch, courtesy of its engaging and intriguing storyline. The show narrates the tale of Krisha Chaturvedi and Devraj Singh Rathore enacted by Anjali Tatrari and Avinesh Rekhi. While their fairytale romance kept the viewers hooked to their television screens, it looks like after entertaining the viewers for nearly one year, Tere Bina Jiya Jaye Na is all set to bid adieu to its ardent fans on August 18, 2022. Tere Bina Jiya Jaye Na: Anjali Tatrari Opens Up About Playing a Simple Girl From Udaipur in ZEE TV’s Show.

The show will end on a dramatic note with a major twist that will surprise Devraj and Krisha. While it will be an emotional moment for all #DevIsha fans, it looks like everyone on set including lead stars - Anjali Tatrari and Avinesh Rekhi got teary-eyed after the final take. They culminated the run with a small get-together to celebrate their achievements and bid each other teary-eyed goodbyes.

Talking about the show going off-air, Anjali Tatrari mentioned, “In my opinion, every good story comes to an end so that when the time is right, we all can move forward. It is a bittersweet feeling, but at the same time, it signifies a new beginning. Having said that, I'm grateful for the opportunity that the show gave me. Tere Bina Jiya Jaye Na has been one of the finest experiences for me, especially in terms of growing as an actor and meeting wonderful co-actors. I have been associated with the show since its inception and the cast is almost like my extended family. Tere Bina Jiya Jaye Na: Rakshanda Khan Opens Up About Donning a Royal Avatar for Upcoming Zee TV Show.

Performing the last scene with Avinesh and the team certainly felt surreal and it really got us extremely emotional considering the journey we have had over the last nine months. My heart is full of pride that we were able to showcase such a wonderful story, which was received so well by the fans. The show would not have been possible without the cast and crew involved, and I wish to thank everyone who showered us with endless love and appreciation throughout the journey."

How much will you miss watching the show? Show your love for the show and the actors in the comment section below! Keep reading LatestLY for more information and updates on your favourite television shows.

(The above story first appeared on LatestLY on Aug 15, 2022 06:36 PM IST. For more news and updates on politics, world, sports, entertainment and lifestyle, log on to our website latestly.com).