Besides Hindi, The Boys series is being dubbed into Tamil and Telugu languages as well and these dubbed versions will be available on the streaming giant from October 28. 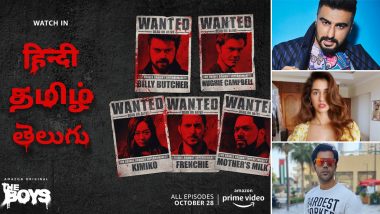 It has been confirmed that Arjun Kapoor, Disha Patani and Rajkummar Rao would be dubbing for the Hindi version of the popular series, The Boys. The Bollywood stars would be voicing for the parts of Billy Butcher, Starlight and Homelander, respectively. The Boys, based on the comic book of the same name by Garth Ennis and Darick Robertson, is directed by Eric Kripke. The Boys Spin-Off Series In Works at Amazon.

The second season of The Boys premiered on Amazon Prime Video from September 4. While sharing about the Bollywood actors roped in to dub the Hindi version, the makers shated a post that read, “Your favourite supe-smashing show is all set to win you over in Hindi, Tamil & Telugu from October 28 #TheBoysTV @arjunk26 @RajkummarRao @DishPatani.”

The Boys Series To Be Dubbed

It's gonna be The Boys v/s The Seven yet again, but this time in हिन्दी, தமிழ் and తెలుగు. October 28! #TheBoysTV pic.twitter.com/6GugOx2d72

Arjun Kapoor, who would be voicing the part of Billy Butcher played by Karl Urban, was quoted as saying, “I have been a huge fan of the series ever since it released on Amazon Prime Video. The character of Billy Butcher, much like the series, has a unique charm and an impressive character arc. Billy’s wild sarcasm and his alluring ruggedness spoke to me and I can’t be more excited to voice this delightfully-vexed vigilante,” reports The Quint. Besides Hindi, this hit Amazon Prime series is being dubbed into Tamil and Telugu languages as well and these dubbed versions will be available on the streaming giant from October 28.

(The above story first appeared on LatestLY on Oct 26, 2020 02:43 PM IST. For more news and updates on politics, world, sports, entertainment and lifestyle, log on to our website latestly.com).