The Kapil Sharma Show: On Independence Day 2020, Composer Duo Salim-Sulaiman Spill the Beans On How Chak De India's Title Song Was Made 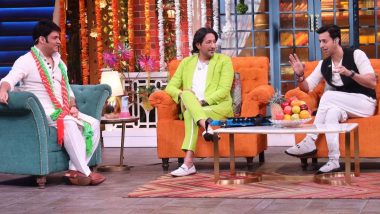 This weekend, The Kapil Sharma Show will celebrate India's 74th year of Independence Day in the company of ace music composers duo Salim and Sulaiman. While we've already seen from the promos how the set has been decked up as per the festivities, the music composer duo definitely added a whole lot more soul to the evening with their fun banter with the host Kapil Sharma and a couple of their delightful renditions. And with Independence Day being the occasion, the duo who composed the music for Shah Rukh Khan's 2007 hit "Chak De! India", revealed some interesting inside information about how the title song from the movie Chak De! India came to be. The Kapil Sharma Show: Here's How Kapil Sharma Maintains Social Distancing Between His Live Audience On Show's Sets (View Post).

Recalling how the song came into being, Sulaiman shared, “The starting point was the name of the movie itself, Chak De! India. When we heard the script, we instantly felt that it demands an impactful patriotic song. So we worked on a song with a lot of depth, however, the producer of the film did not like it. He felt that the song didn't fit the bill. Therefore, we went on attempting various new versions and we made around 7-8 versions of the song.” Sonu Sood Breaks Down on The Kapil Sharma Show As Migrant Workers Express Their Gratitude (Watch Video).

Salim further added, “The second version that we made, was quite dumdaar, with a lot of beats and the works… but it lacked soul. All the versions that followed got cancelled. Then I told Sulaiman, let's not do this movie. I felt that if we weren’t able to do justice to the movie with our compositions, then we may as well not do the movie at all. That’s when Sulaiman told me, Koshish kartein hain, kuch karte hain… kuch karte hain… And that’s how "kuch kariye… kuch kariye" came about. Then we immediately contacted Jaideep Sahni, who is the writer of this film, who helped us with kuch kariye… kuch kariye… nas nas meri khole.”

I believe everyone who has loved and adored the song will agree when I say that Chak De India song (also the movie) is an emotion all together and one can't feel anything but patriotic when the song plays.

(The above story first appeared on LatestLY on Aug 15, 2020 01:22 PM IST. For more news and updates on politics, world, sports, entertainment and lifestyle, log on to our website latestly.com).