Bollywood actor Sonu Sood who has been the real hero amid the COVID-19 pandemic will be gracing comedian Kapil Sharma's comedy show in the coming weekend. Read on. 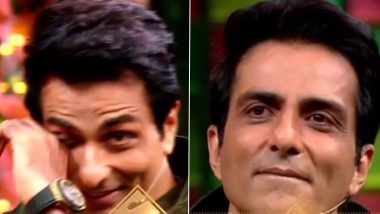 Bollywood actor Sonu Sood who has been the real hero amid the COVID-19 pandemic will be gracing comedian Kapil Sharma's show in the coming weekend. Earlier, it was reported that Sood will be the first guest on the show after the lockdown and well yes he is. Sony TV teased fans with a mini glimpse from the upcoming episode and it will see the messiah of migrant workers in tears. In the clip, we see a few migrant workers who reached their hometown safely amid the lockdown expressing their gratitude towards the star's gesture. And after watching the same, the Dabangg actor can be seen getting emotional. Kapil Sharma to Start Shooting for His Comedy Show in Mid-July, Sonu Sood Could Be the First Guest (Read Details).

For the unaware, since the time lockdown was imposed in the country, Sonu has turned into a superhero (without a cape) and has been helping not just the migrant workers, but many in need of help amidst the crisis. “Laakhon logon ko unke ghar pohonchakar bane Sonu Sood, desh ke dilon ke asli Superstar! Aur ab aa rahe hai who,” wrote the channel’s official Instagram while sharing the promo. The episode will air on August 1, 2020, at 9.30 pm IST.  Sonu Sood Celebrates His 47th Birthday Today! Kajal Aggarwal, Ram Pothineni Extend Birthday Wishes To The Hero On Twitter.

Check Out Sonu Sood On The Kapil Sharma Show Below:

A post shared by Sony Entertainment Television (@sonytvofficial) on Jul 28, 2020 at 3:06am PDT

Also, it was very recently when Sood helped a family in Chittor, Andhra Pradesh with a tractor after a video of the farmer's daughter ploughing the filed went viral. The family could not afford oxen. Well, that's what a real hero looks like! Kudos to the Bollywood actor. Apart from this, Sonu on The Kapil Sharma will be a laughing riot for sure. Stay tuned!

(The above story first appeared on LatestLY on Jul 30, 2020 02:00 PM IST. For more news and updates on politics, world, sports, entertainment and lifestyle, log on to our website latestly.com).