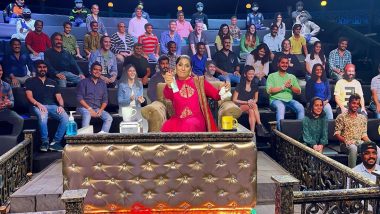 From amongst television shows that began shooting late, The Kapil Sharma Show was the first. And considering how the show had lots of other aspects to deal with, given its filmed with a live audience, we understand the delay. The show began filming on July 18, however, with a live audience of only 9 people. Wondering how the team is making do with only 9 men and women sitting in the audience seats as opposed to a full studio like it usually is? Ask Kapil Sharma and he has the answer. The Kapil Sharma Show: Post-Lockdown, Kapil Sharma To Invite COVID-19 Superheroes On His Comedy Show? (View Tweet).

The team has placed live cutouts of some select audience and has placed them between the real-life audience of 9 people. Not only does this fulfil the purpose of giving the illusion of a studio-full of the audience but also ensures social distancing is maintained between the real-life audience. Kapil Sharma to Start Shooting for His Comedy Show in Mid-July, Sonu Sood Could Be the First Guest (Read Details).

Check Out This Innovative AF Idea Below:

in this picture how many people are real? 🤔 #shooting #tkss #thekapilsharmashow #comedy #fun #laughter 😀

On the work front, the team has begun shooting for The Kapil Sharma Show and there is a buzz that Kapil plans on inviting a host of COVID-19 frontline warriors as guests on the show. There are also reports suggesting that Kapil's first guest will be Sonu Sood, the messiah for migrant workers. Sonu ha been the saving soul for thousands of migrant workers whom he helped get home during the lockdown. In fact, Sonu has now also launched his own Pravashi Rojgar app for migrant workers to help find jobs.

(The above story first appeared on LatestLY on Jul 23, 2020 06:06 PM IST. For more news and updates on politics, world, sports, entertainment and lifestyle, log on to our website latestly.com).