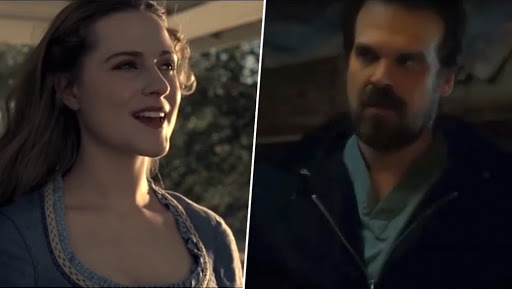 Hopper, played by David Harbour, is keen to date Joyce (Winona Ryder) but she does not seem interested beyond being a friend, much to the annoyance of the cop, who is also uncomfortable with the budding romance between his adopted teen daughter Eleven (Millie Bobby Brown) and Mike (Finn Wolfhard).

"You should never date a guy like the cop from Stranger Things. Extreme jealousy and violent rages are not flattering or sexy like TV would have you believe. That is all," Wood wrote on Twitter. Stranger Things 3 Breaks Netflix Records, Becomes Most-Viewed Show in First Four Days of Release

When fans of the show argued that the story was set in the 1980s, the "Westworld" actor said it was not acceptable even if it depicted a certain period in history. "Yes, I am aware it's 'just a show' and it's set 'in the 80s' even though this stuff was unacceptable then too, but that's exactly my point. It's just a show and this is a gentle reminder not to fall for this crap in real life. Red flags galore." Stranger Things Season 3: From Icky Monster Transformation to a Surprise Death, 15 Standout Moments in Netflix’s Fantasy Show (SPOILER ALERT)

You should never date a guy like the cop from #strangerthings Extreme jealousy and violent rages are not flattering or sexy like TV would have you believe.

Wood said Hopper getting angry with Joyce for rescheduling a dinner appointment raised "red flags" for her. "She rescheduled the date he yelled and got in her face about while policing every guy she spoke to. No thanks,"  the actor said. The popular series started streaming on Netflix from July 4.