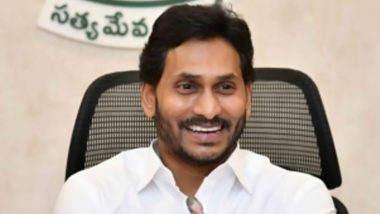 Police have stepped up security across the district, especially district headquarters Amalapuram which witnessed mob violence on May 24 against the government's move. Ambedkar Jayanti 2022 Date: When Is Bhim Jayanti? Know History, Facts and Significance of Observing Birth Anniversary of Dr Br Ambedkar, the Father of the Indian Constitution

Dozens of people, including 25 police personnel, were injured in the violence.

In view of the Cabinet decision, police made elaborate security arrangements to prevent any protests. Additional forces were deployed in the town and in other parts of the district to prevent any untoward incident.

A tight vigil was being maintained on the organisations which had organised massive protests leading to the violence last month.

The Konaseema district was carved out from East Godavari with Amalapuram as its headquarters.

It was one of the 13 districts created on April 4, taking the total number of districts in the state to 26.

The government had named some of the districts after prominent personalities like freedom fighter Alluri Sitarama Raju, former chief minister and TDP founder Nandamuri Taraka Rama Rao, who was popular as NTR.

The YSR Congress Party (YSRCP) government headed by Jagan Mohan Reddy had come under criticism from Dalit groups and others for not naming a district after Ambedkar.

However, the decision by the government to rename Konaseema district drew flak from some groups.

Hundreds of people had participated in the protest called by Konaseema Sadhana Samithi (KSS) on May 24 and this led to violence.

Investigation by the police has revealed that two dominant castes in the district -- Kapus and Setti Balijasa -- came together to oppose the move to rename Konaseema district after Ambedkar.

According to police, the coming together of these communities intensified the protests against the renaming of the district as more people participated in the agitation.

(The above story first appeared on LatestLY on Jun 24, 2022 03:57 PM IST. For more news and updates on politics, world, sports, entertainment and lifestyle, log on to our website latestly.com).