Bineesh Kodiyeri, Son of CPM State Secretary Is Under ED Custody in Bengaluru; BJP Demands Probe into His Links With KCA and Malayalam Film Industry

Two days after the arrest of CPI-M leader Kodiyeri Balakrishnan's son Bineesh Kodiyeri by the ED in a PMLA case, the state BJP on Saturday demanded a probe into his links to and activities in Kerala Cricket Association, Kerala State Sports Council and the Malayalam film industry. 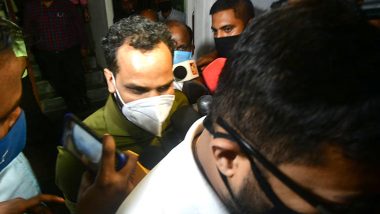 Two days after the arrest of CPI-M leader Kodiyeri Balakrishnan's son Bineesh Kodiyeri by the ED in a PMLA case, the state BJP on Saturday demanded a probe into his links to and activities in Kerala Cricket Association, Kerala State Sports Council and the Malayalam film industry. Bineesh is now cooling his heels in Enforcement Directorate's Benguluru division custody till Monday after his arrest under the Prevention of Money Laundering Act on October 29. Speaking to the media, state BJP President K Surendran said that over the years the Kerala Cricket Association (KCA) affairs have been kept under the wraps by successive state governments. Sandalwood Drug Case: CFSL Returns ‘Improper’ Hair Samples of Kannada Actresses Sanjjanaa Galrani and Ragini Dwivedi

"We demand a thorough probe into various deals in the KCA since the kingpin in all such activities is Bineesh. His role has to be put under the scanner, as quite a few illegal deals in the KCA have surfaced by now. A probe into the KCA functioning by a national agency ought to be done," Surendran said. Bineesh is a KCA member from Kannur district and his closest aide is a top district official there and Bineesh was allegedly trying to take control of the KCA. Mangaluru Drug Case: Kannada TV Anchor Anushree Summoned by CCB for Alleged Association With Kisore Aman Shetty

"Another establishment that has to go under official scrutiny is the Kerala State Sports Council led by Mercykuttan. Her secretary is a woman who has been posted by the CPI-M and allegaions are that a Council car was used to transfer smuggled gold to Bengaluru. This also needs to be probed," the BJP leader said. Surendran also pointed out that Bineesh's role in the Malayalam film industry also has to be probed.

"The role of a few producers in the Malayalam film industry has to be probed, especially in context of what was happening here in the past six years. The proceeds of gold smuggling and drug trafficking were invested in the film industry here. A detailed probe is needed to unravel the goings-on," added Surendran. Bineesh by acted in small roles in numerous Malayalam films in the past and is an integral part of Association of Malayalam Movies Artistes. He was also a key member of AMMA cricket team when it used to send a cricket team to participate in various tournaments.

(The above story first appeared on LatestLY on Oct 31, 2020 03:52 PM IST. For more news and updates on politics, world, sports, entertainment and lifestyle, log on to our website latestly.com).