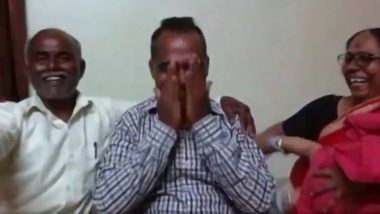 Solapur, December 3: Ranjitsinh Disale, a teacher from Maharashtra's Solapur, on Thursday, won the Global Teacher Award 2020. Ranjitsinh Disale has also become the first Indian to win the Global Teacher Award. Disale will get USD 1-million as award money. He was awarded for contribution to promote girls' education and trigger a QR Coded (QR) coded textbook revolution in India.

Disale emerged the winner from 10 finalists from across the world for the annual prize. Global Teacher Award was founded by the Varkey Foundation in 2014 to recognise an exceptional teacher who has made an outstanding contribution to the profession. Disale announced that he would give fifty percent of the price money to the nine finalists. Global Teacher Prize 2020: Indian School Teacher Ranjitsinh Disale Wins USD 1 Million for Promoting Girls' Education.

Who Is Ranjitsinh Disale?

He ensured that the textbooks were available in the local language for the pupils and not only translated the class textbooks into his pupils' mother tongue but also embedded them with unique QR codes to give students access to audio poems, video lectures, stories and assignments.

Due to his efforts, there are now no reported teenage marriages in the village and 100 per cent attendance of girls at the school. "In this hard time, teachers are giving their best to make sure every student has access to their birthright of a good education," reported BBC quoting Disale as saying. Disale's school went on to become the first in the state of Maharashtra to introduce QR codes and after submitting a proposal and successful pilot scheme.

The Global Teacher Prize 2020 winner's announcement was made at a virtual ceremony broadcast from the Natural History Museum in London by British actor-broadcaster Stephen Fry. Disale was selected in the final 10 from over 12,000 nominations and applications from over 140 countries.

(The above story first appeared on LatestLY on Dec 03, 2020 09:29 PM IST. For more news and updates on politics, world, sports, entertainment and lifestyle, log on to our website latestly.com).