Milind Bharambe, handling the additional charge of the city commissioner over the video has initiated a probe now. Bharambe claimed that the issue is serious, and probing has been started. Also, no one will be spared even if its police, he ensured. 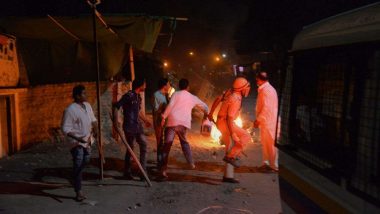 Aurangabad, May 14: Days after the riot-hit Aurangabad district of Maharashtra has come to normal, a video of police constables accompanying the rioters torching vehicles has raised fingers on the entire police force. Meanwhile, the inspector general of police Milind Bharambe who has been handling the additional charge of the city commissioner after watching the nine-minute-long video has initiated a probe in the case. "The issue is serious, and we are probing it. I can promise that no guilty policeman or rioter to be spared," Bharambe said to the Times Of India.

Adding, the Additional DGP (law and order) Bipin Bihari, who has been sent to Aurangabad to supervise the situation and check violence has ensured that no one would be spared including the police, who triggered the violence in the district.

It is believed that the video is shot by the locals, also as the internet services were suspended due to the law and order situation, the district police remained red face after it had come across with the video later. The video clearly showed how miscreants torched the parked vehicles and added fuel to the prevailing tense situation over there. The news report mentioned that the incident is of Nawabpura area of Aurangabad.

Although the main reason behind the riots in Aurangabad district is yet to be ascertained. But it's believed after an angry mob from one community overturned several fruit carts at Shahaganj, belonging to another community over a heated argument on the sale of mangoes led the situation tense. Also, in another incident, an automobile garage owner from Moti Karanja area was assaulted by a mob, which eventually led around 45 shops gutted in the riot. It was alleged that the shopkeepers of the area were facing communal threats from past two weeks and complained same to the city police commissioner Milind Bharambe earlier, but no serious act been taken.

(The above story first appeared on LatestLY on May 14, 2018 04:11 PM IST. For more news and updates on politics, world, sports, entertainment and lifestyle, log on to our website latestly.com).