Euro 2020: Spain Struggling To Keep Up With Weight of Expectations, Says Alvaro Morata

The striker has opened up explaining his team's poor show in the ongoing Euro 2020 competition. Morata scored for Spain in their 1-1 draw against Poland on Sunday, June 20. La Roja now need to win their last match against Slovakia on June 23 to ensure a last-16 spot. 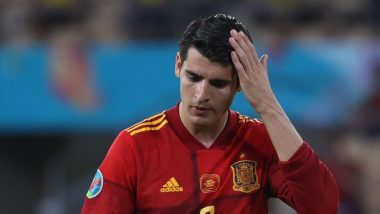 Spain striker Alvaro Morata has explained his side's underwhelming performances in the ongoing Euro 2020, stating that they are struggling to deal with the expectations from them as they are trying to follow the footsteps of a "generation of geniuses". A decade ago, Spain was one of the dominant forces in all of Europe, winning two consecutive Euro titles in 2008 and 2012 with the famous 2010 World Cup win in South Africa. With players like Andres Iniesta, Xavi, Fernando Torres, Iker Casillas, David Silva and Sergio Ramos amongst others, Spain were at their peak 10 years ago. But currently, La Roja is a transitional phase under Luis Enrique, with a squad of mainly newbies, who are without too much experience. Sports News | Lewandowski Gives Poland 1-1 Draw Against Spain at Euro 2020

“If we listen to what people say that won’t help, because they are all waiting to pile on and criticise us,” Morata said, as quoted by Sky Italia. He added, "Usually when big nations reach a competition like this, there is a sense of unity around them. We know that we’re following a generation of geniuses who won everything and it’s difficult for us to fill those shoes, but we have to believe in ourselves.”

Spain face the prospect of making an unexpected exit from the Euro 2020 after having garnered just two points from as many matches. They have to win their next match against Slovakia on June 23, which would increase their chances of making it to the last 16. Morata scored the only goal for Spain in their 1-1 draw against Poland on Sunday.

But the Juventus striker has been criticised for his poor show against Sweden in Spain's first match of the Euro 2020 campaign. Although Morata was able to silence his critics by putting Spain 1-0 up, Robert Lewandowski made sure Poland remained in the game when he levelled for his side.

Morata was criticised even more after Moreno missed a penalty and he failed to slot it home, as he instead shot the ball wide of the goal. Explaining his miss, he said, "The ball was travelling at an incredible speed and it was difficult to get it under control," the former Chelsea player, said, adding, "Perhaps I was too close to it and should have made a different choice.”

(The above story first appeared on LatestLY on Jun 20, 2021 05:38 PM IST. For more news and updates on politics, world, sports, entertainment and lifestyle, log on to our website latestly.com).