7th Pay Commission: Here is a piece of good news related to Dussehra bonus for a section of central government employees. 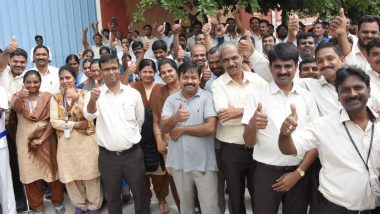 7th Pay Commission: Here is a piece of good news for a section of central government employees. The Centre has announced bonus for non-gazetted employees of Indian Railways, excluding RPF/RPSF personnel, ahead of Dussehra 2021. The Union Cabinet, chaired by Prime Minister Narendra Modi, approved the Productivity Linked Bonus (PLB) equivalent to 78 days' wages for the financial year 2020-21. 7th Pay Commission: Good News Likely for Central Govt Employees Before Diwali 2021, DA Rate To Be Hiked This Month.

According to the Centre, more than 11 lakh non-gazetted employees of Indian Railways will receive the bonus. The payment of bonus will cost the exchequer Rs 1984.73 crore. This bonus is announced each year before the Dusshera/ Puja holidays. The decision of the Cabinet shall be implemented before the holidays for this year as well, the government said in a press release. "This is expected to motivate the employees for working towards improving the performance of the Railways," it added. 7th Pay Commission: Good News Regarding DA, DR Arrears Likely Soon, PM Narendra Modi to Take Final Call.

The wage calculation ceiling prescribed for payment of PLB is Rs 7000 per month. The maximum amount payable is Rs 17,951 for 78 days. The Productivity Linked Bonus covers all non-gazetted employees of the Indian Railways, excluding RPF/RPSF personnel, who are spread over the entire country.

Meanwhile, central government employees remain hopeful of another hike in the rate of dearness allowance, under the 7th Pay Commission. Reports suggest there could be a hike 3 percent in the DA rate this month or in November. An announcement could be made before Diwali 2021. Currently, central government employees get 28 percent of basic pay as DA.

(The above story first appeared on LatestLY on Oct 07, 2021 12:33 PM IST. For more news and updates on politics, world, sports, entertainment and lifestyle, log on to our website latestly.com).